I LOVE all things related to medicine–especially the history of medicine and the science that goes along with it so given that I was ecstatic to visit 6! nerdy, science-y, medical-y museum in a span of two weeks. Not a super well-known fact, but IRL I am a registered nurse and before that I worked as a registered respiratory therapist. There isn’t a single area in a hospital that I haven’t spent time in as a professional… Emergency rooms, YEP. Operating Rooms, YEP. Morgue during autopsy, YEP. Pharmacy Prep areas, YEP. Delivery Rooms, YEP. Intensive Care Units, YEP, and regular ole patients’ room. I’ve worked in them all at some point or another. SO, it should come as no surprise to anyone, that I LOVE all things related to medicine. Enter the Operating Museum and Herb Garret, Science Museum, Hospital Museum, Pathology Museum, and Florence Nightingale Museum. All in London and all open to visitors. [However, they are not all free].  The Semmelweis Museum in Budapest makes up the sixth museum in this sext-fecta of historical medical museums.

First up… The Old Operating Theatre and Herb Garret aka one of the coolest and best museums in LONDON. 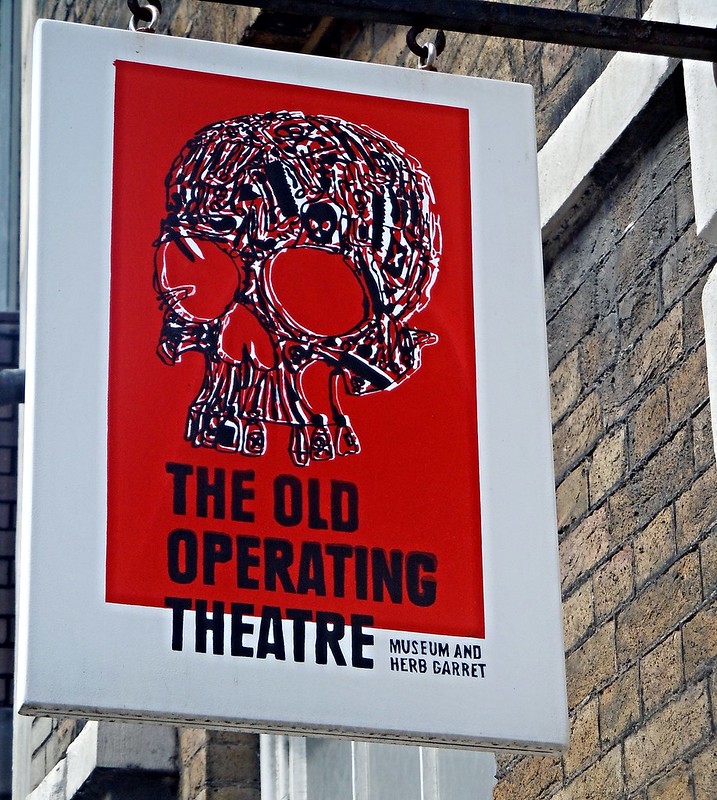 In the shadow of the Shard, near all the cool and modern construction that is going on near London Bridge, lies The Old Operating Theatre and Herb Garrett.  It is a spectacular little museum filled with tons of historic and interesting items related to medicine, pharmacy, and surgery; it is also one of those museums that you don’t necessarily hear a lot about and even if you do, you are still not really sure where it is.  It’s hidden away in the roof space of what was once St. Thomas’ church. It was closed last time I was in London, so I made sure that I’d be able to go in this time. Missing the old Operating Theatre twice probably would have killed me. Thankfully, we won’t have to find out.

The Old Operating Theatre is a bit hard to find.  I found it as I find most things, by wandering, but that’s not the recommended way of getting there. It’s a bit off the beaten tourist path in London [still Zone 1, still in the city].  If you can find the fabulous Borough Market, which is celebrating 1000! [let that sink in a moment] years in Southwark, then you can find the old operating theatre. I whole-heartedly recommend visiting the market for food and drink and then some more food… [perhaps after the museum if you tend to be a bit squeamish] Anyway… you wander down St Thomas Street and as you do so, you are greeted by this ever-so-slightly alarming skull. And this is one of the many reasons I love London. It’s not often that a skull greets the visitor at a proper museum. 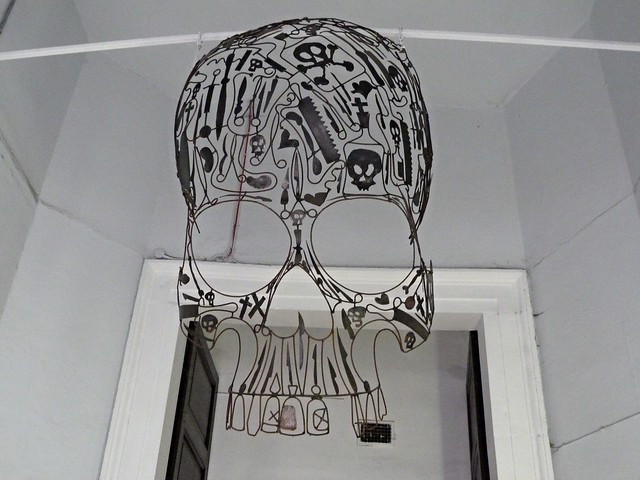 What’s far MORE alarming, at least to me and my propensity to trip and fall on staircases and hurt myself, is the never-ending spiral of stairs [32 tiny, narrow stairs, in case you were counting] that lead up into the old operating theatre. It DOES take some effort, but it IS worth it. 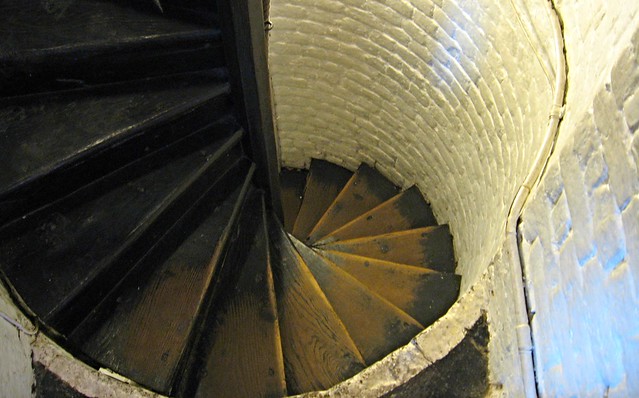 First is the herb garret. The heady scent from the big bowls of medicinal herbs and spices will smack you violently in the face the second you go inside, so be prepared for that. Once inside there are numerous displays of herbs, spices, medicinal plants, distillations, tinctures and powders, all with thoughtful hand-written explanations and thoughtful captions such as this description for Motherwort, taken from Maud Grieve’s A Modern Herbal (1931): “Especially valuable in female weakness and disorders… allaying nervous irritability and inducing quiet and passivity of the whole nervous system. Good against hysterical complaints.”  [because you know those damn Victorians were obsessed with curing ‘female weakness and hysterical complaints’]. 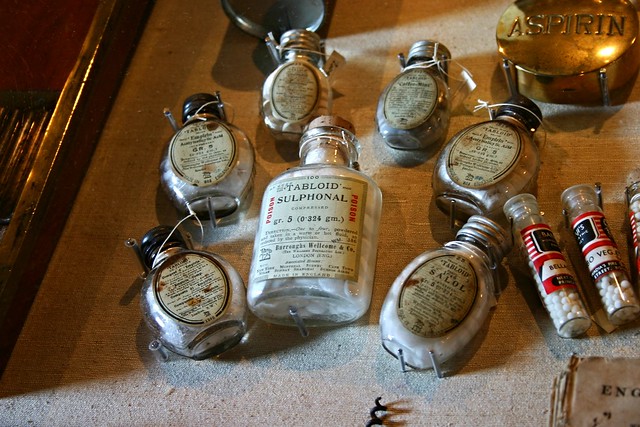 There isn’t a square inch of free surface space in the place – it’s an apothecary of chaos. The ambiance created by the smell is absolutely fantastic – there’s a sense of life and of discovery, purely down to the mixing aromas of all the ingredients in the room. It is visually stunning, and somewhat overwhelming, but it *feels* real. I can almost imagine I’m in the old-school apothecary where they just grab a little of this and a bit of that, call it a prescription and send you on your way. And whether or not they’re sure of which herb goes where, who knows? But you get a real sense for the magic and the experimental spirit that lead us to modern pharmacy we have today. 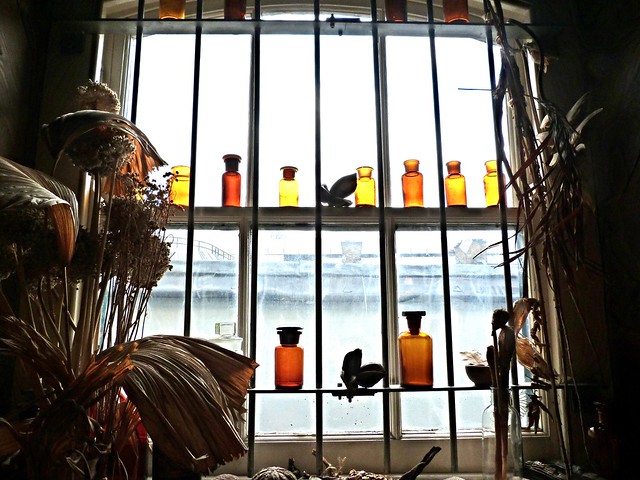 Once you’ve had your fill of the apothecary [or if the smell starts to get to you], head on to the back to the Operating Theatre. This is the earliest surviving example of an operating room in Europe, [circa 1850 or therabouts] ,and it’s pretty impressive. This one was a teaching theatre, and you really feel that priority was given to the spectators in this environment. 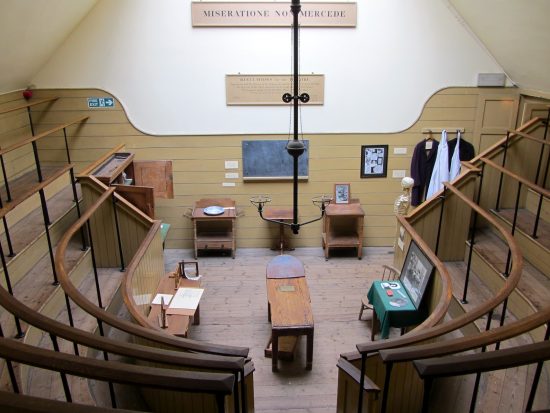 At times, I tend to have an over-active imagination, and it is easy to picture the gruesome scene– well-attired medics sawing through flesh, blood squirting everywhere, scholars craning their necks for a closer look, and for those without strong stomachs– swooning, or making a mad dash for the nearest bed pan; and let’s not forget the blood-curdling screams of the patients…imagine this…a patient is lying on the operating table…wide awake and staring wide-eyed right back at the surgeon. Anesthetics hadn’t been discovered yet and patients were given the option of whisky, opium, or being knocked out by being hit on the head with a mallet.

Surgical technique was still a bit of an idiomatic expression; surgeons relied on swift amputation techniques, the faster you could remove a limb the better a surgeon you were. Most patients died of infection rather than the actual blood loss or surgery and the old frock coats worn by surgeons during operations were, according to a contemporary, ‘stiff and stinking with pus and blood.’

Patients often had injuries which prevented them from taking the spiral staircase up to the theater, and were therefore transported into the theater via a pulley system and an opening in the wall behind the current chalkboard. The ground would also be covered in straw to help prevent blood from dripping on to the patrons of the church below the theater. [because that would be rude… taking communion to received the body and blood of Christ only to receive the ACTUAL blood of John Smith or some other mere mortal]

Museum visitors are also provided with a first-hand account for good measure:

The first two rows… were occupied by the other dressers, and behind a second partition stood the pupils, packed like herrings in a barrel, but not so quiet…The confusion and crushing was indeed at all times very great, especially when any operation of importance was to be performed, and I have often known even the floor so crowded that the surgeon could not operate until it had been partially cleared. There was also a continual calling out of “Heads, Heads” to those about the table whose heads interfered with the sightseers. 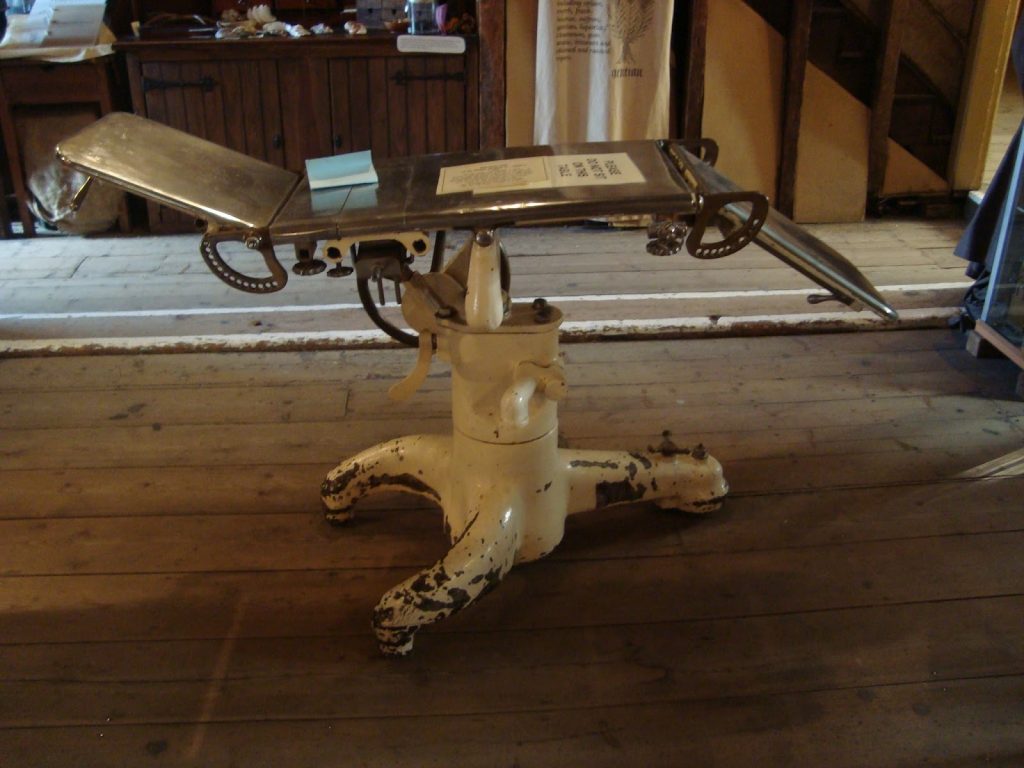 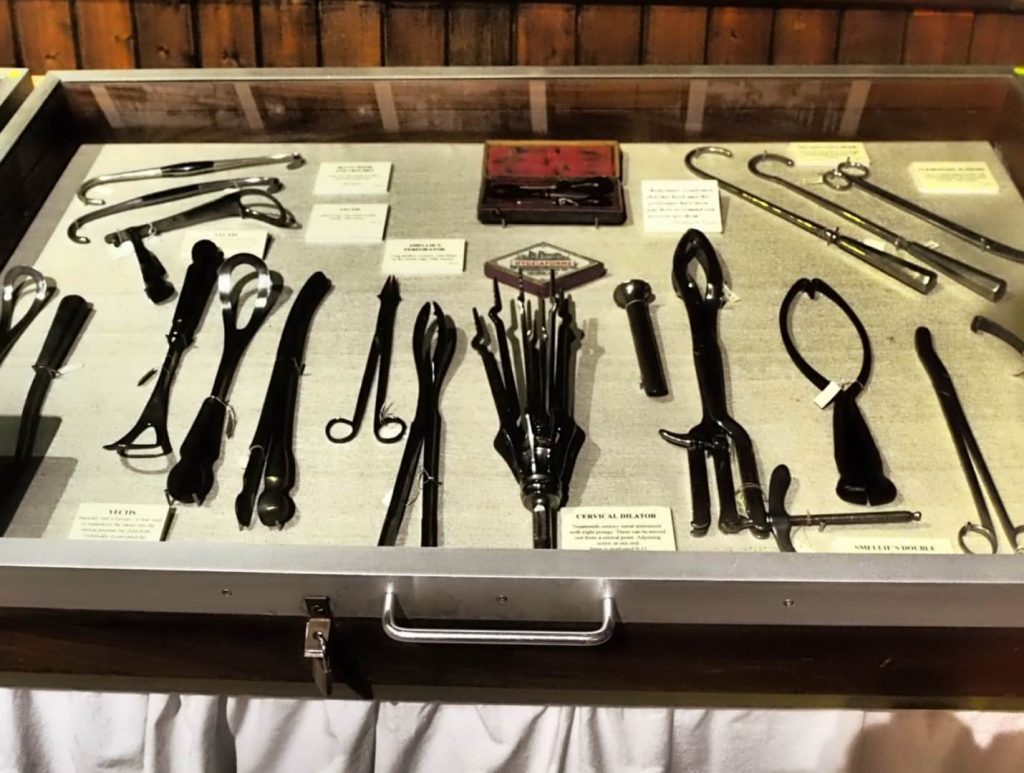 Exit the theatre and one can examine the instruments of torture: tools for trepanning; row after row of blades, designed for every imaginable variety of amputation; and even a physician’s stick, used for walking, but also held across the patients mouth as a restraint during surgery – as evidenced by the surviving teeth marks. This was by far my favorite part of the museum. 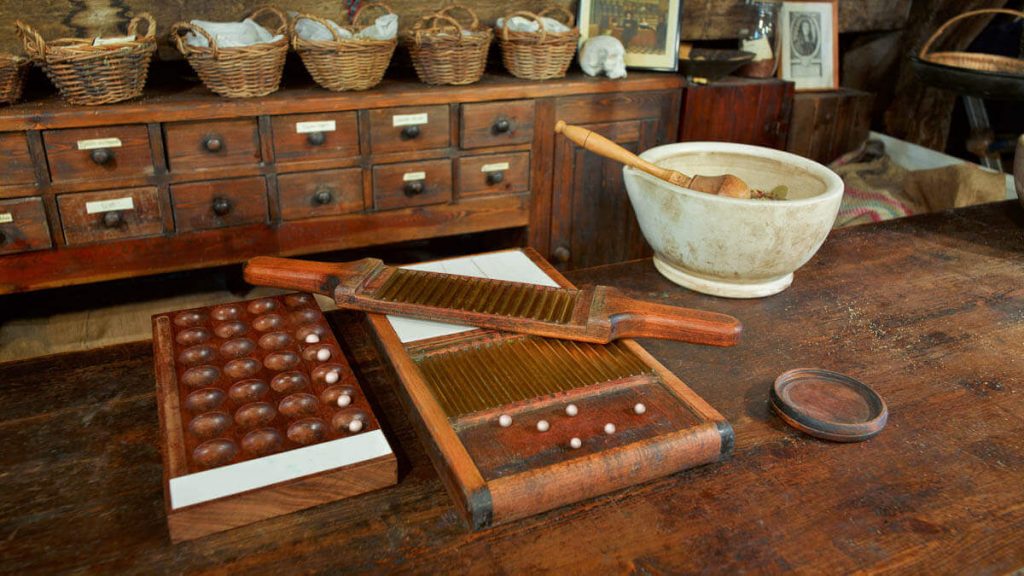 Elsewhere, there are areas dedicated to the use of animals in medicine (leeches or maggots anyone?), bizarre Victorian contraptions for the hard of hearing, and a number of human organs pickled in formaldehyde, including a pair of lungs blackened by the London smog.

One Comment on “Surgical history and More Medical Museums”