Days 2-4 in Budapest... Current event will tell you there is a refugee crisis in Budapest.  Current events are not wrong. Refugees are pouring in to the country at such a rapid pace that officials can’t keep up; however, refugees are being contained to one are of the city. So there’s that.

Let’s go adventuring, shall we, but first, a little history lesson. Budapest is a fascinating historical city separated into Buda and Pest by the Danube River. This area represents the Hungarian part of the Austro-Hungarian Empire which fell at the beginning of WWI.  After WW2 in 1949, Hungary was declared a people’s republic and was ruled by communism. The iron curtain fell in 1989 but when touring Budapest, you will see that there are reminders of the Communist regime scattered throughout the city today.

Today, Hungary is part of the European Union which is part of the reason it is facing its current refugee crisis.  DJ and I narrowly escaped Budapest ahead of Hungary closing its borders in an attempt to stem the influx of these invaders. Authorities in Budapest are trying to help the refugees [migrants, illegals, ect] by providing shelter, water, and facilities at the train stations, but the migrants want more.  More handouts from not-exactly-wealthy governments. More demands from people not vetted by any type of security.  It’s quite the sticky situation… but I digress…

One of the few remaining Soviet Monuments is Liberty Statue on Gellert Hill. This statue was originally erected to honour the Soviets who sacrificed themselves to free Hungary from the Nazis occupation. As we all know, that liberation came with a price and the Soviets ended up locking out the Western world. The statue was damaged in the 1956 Hungarian Revolution, and in 1989 after the fall of communism, the statue was kept to honour all those who gave the ultimate sacrifice for Hungary. An inscription in the statue states: To the memory of those all who sacrificed their lives for the independence, freedom, and prosperity of Hungary. 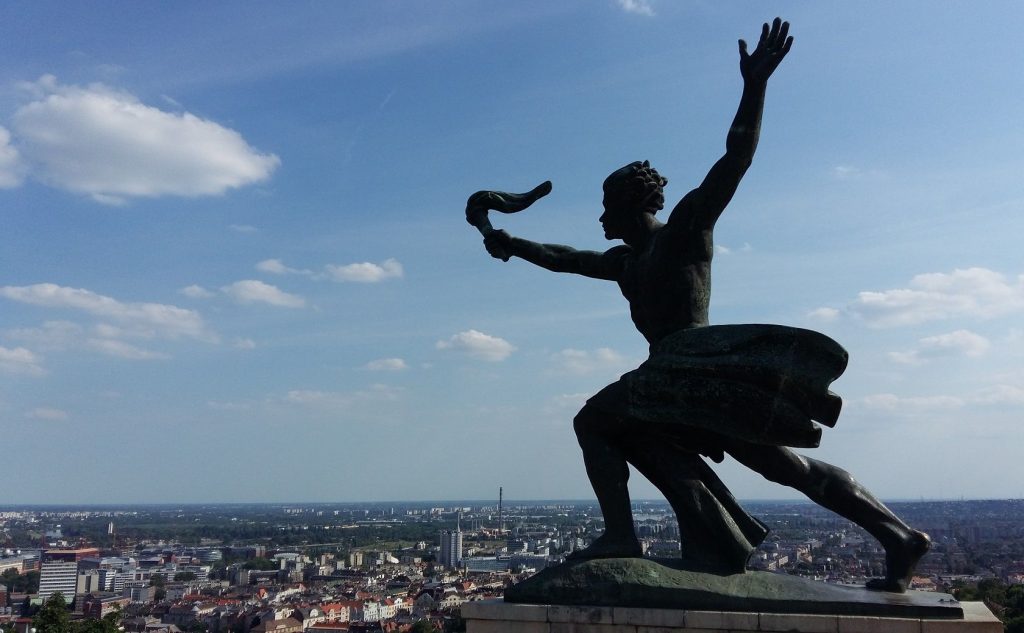 Ruin Bars are a popular spot that came out of the fall of communism. These are trendy hipster pubs that are decorated with retro furniture and have a very cool vibe.  Known by locals as ‘romkocsma’ (ruin pub in Hungarian), these pubs have been a part of the drinking culture for over a dozen years. Each one is unique but, more often than not, a ruin pub in Budapest will have a rundown and slightly sketchy exterior that completely contradicts the vibrant colours and unique ambiance you’ll find inside. Filled with second hand furniture and nearly anything funky picked off the curb, these formerly abandoned buildings are now pretty integral to Budapest. And it all seems to have started in the city’s 7th district. 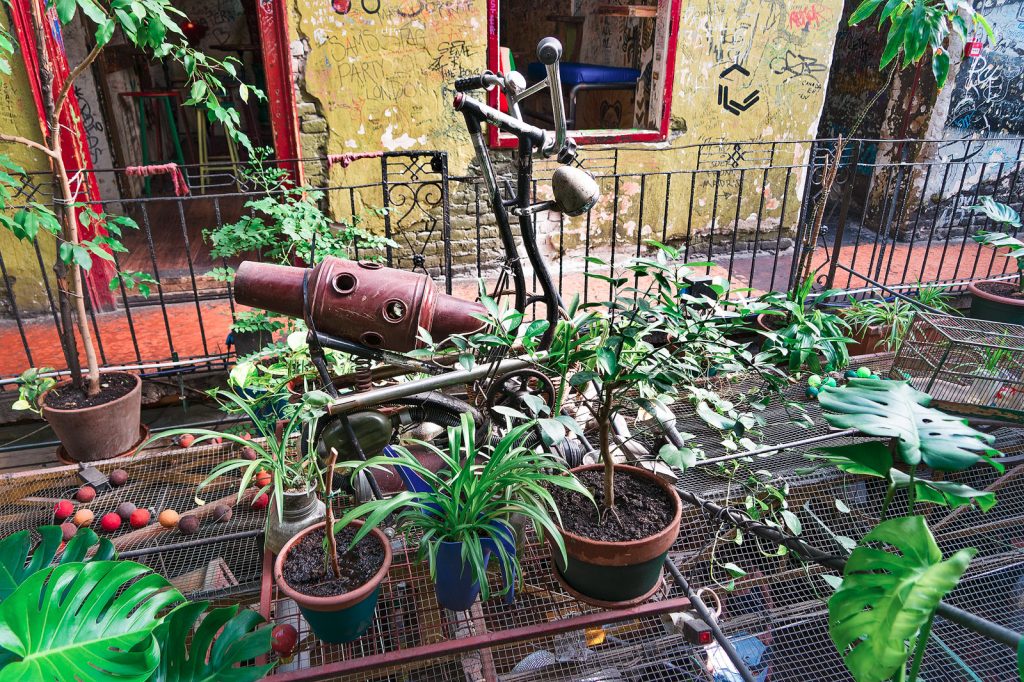 The neighbourhood was largely damaged and neglected after World War II and it’s said that ruin pubs are what changed the district’s future for the better. Where many saw abandoned factories and deteriorating apartment complexes, the people behind Szimpla saw potential. Over the years, the transformation of these buildings (and now others across the city) led to an entirely new concept in Budapest that super cool.

Budapest is in a major transition right now and an interesting part of traveling there is that you can see a contrast between the communist era and the modern day society of today. Communism is very much a part of the conversation in Budapest. People that are the same age as I am remember growing up during the regime. It has been slower to develop than other communist cities due to lack of funding, but this has allowed it to stave off the dreaded gentrification that is affecting so many cities today. It won’t be long until the West invades though, even now you will find McDonald’s and Starbucks. As a matter a fact, Budapest was the first city in the Eastern bloc to open a McDonald’s. They had a more relaxed form of communism than other countries, giving it the nickname Goulash Communism. They enjoyed a certain freedom and amenities that weren’t available to other countries in the Eastern Bloc. 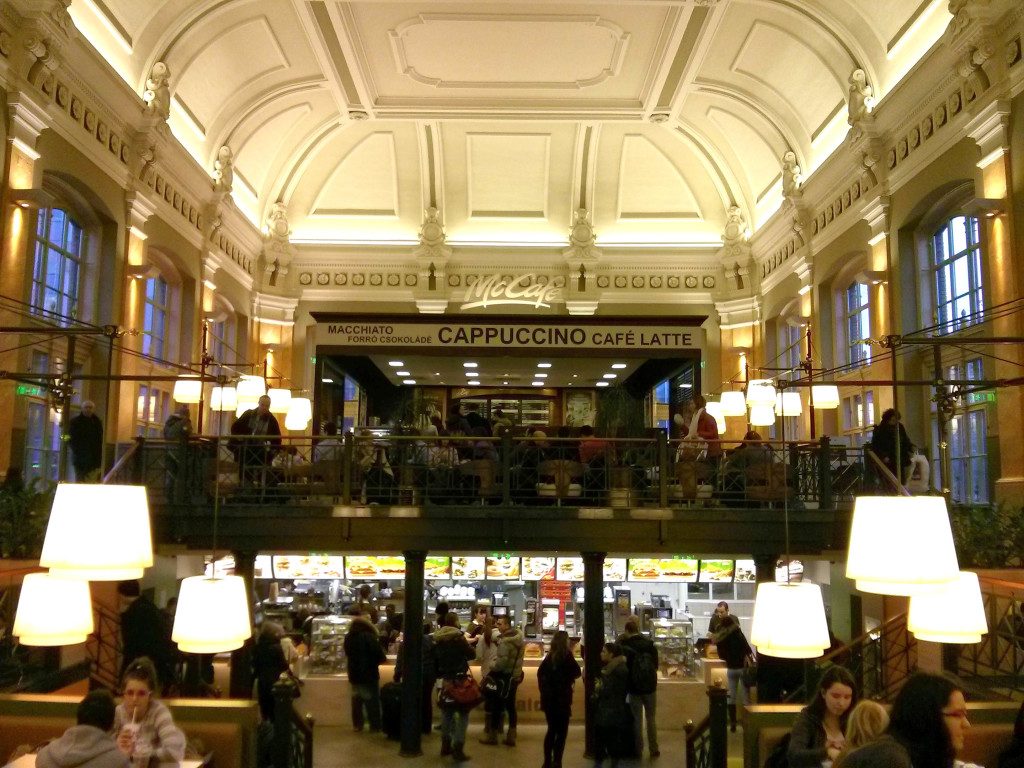 Definitely the fancy one

Our train to Prague was nearly 2 hours and 45 minutes late getting in last night. It originated in Budapest, then went to Prague. For the first time in 10+ years of traveling, the police boarded the train at the Czech border, and checked passports. It reminded me a little bit of when I was hanging out in Zapatista territory– at least these police didn’t have machetes attached to their hips.

The migrants are now, shall we say, pissed. They are now attempting to block trains from coming and going by standing on the tracks unless they are allowed on them… without a passport… Without a ticket… without any type of security checks. And they all want to go to Germany. Germany. Does. Not. Want. Them. and neither does anyone else after these antics. To riot against the very people who have literally given you shelter, water, and a place to pee because you did get want you “want”, is a bit like cutting off your nose to spite your face. It makes no sense. They are acting like children who got their candy taken away.

What’s the answer? Idk, but Greece and Italy can’t patrol all the islands that all the refugees are arriving to. Hungary put up a razor wire fence on its border with Serbia but it can’t cover the railway which is being used as a highway. Romania isn’t strong enough to police it’s borders. The Austria/ Hungary border is ground zero. Refugees are trying to get into Austria by any means necessary since they see it as the gateway to Germany.  And people are dying–hiding in truck shells. And sealed refrigerators.