I was lucky enough to attend some of the 1996 Olympic Games in Atlanta. Winter 2006 was a lot different… winter sports vs summer sports.  Torino, Itlay vs Atlanta, USA.  Olympic village vs my own house.  4 days + opening ceremony vs random days spread out over the two weeks. 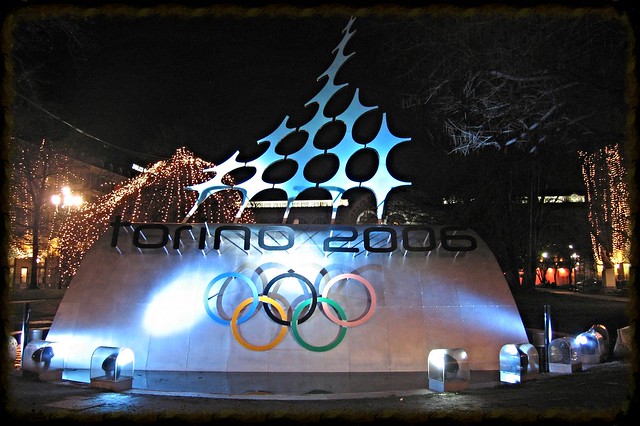 Opening Ceremony:  There’s nothing quite like seeing the opening ceremony in person…The pomp and circumstance, the parade of athletes, the cool costumes, and the lighting of the Olympic flame—it’s all pretty amazing.  There’s such a feeling of hope and opportunity in the air.  It’s the only time–especially at the Winter Games when a lot of events are some distance from the host city–when everyone is together.  All [or nearly all] of the athletes, the spectators, the media–everyone is in one space for the opening.  After the opening ceremony, people scatter, and they don’t always meet back up at the closing.

Seeing the flame be lit  and watching the parade of athletes was awesome.  I always wanted to be an Olympian, but when it comes right down to it, I don’t have the competitive nature to push myself day in and day out.  Sure I always played sports… even went to college on athletic scholarship, but at the end of the day, I played sports because they were fun… and I enjoyed the camaraderie with my teammates.

Bardonecchia:  I stayed in Turin for the day prior to and the day of the Opening Ceremony and then next morning high tailed it up to the mountains courtesy of the free Olympic shuttle.  I based myself in Bardonecchia because 1).  Mountains…skiing…the cool winter sports 2) closer proximity to the other winter villages than Torino 3) free shuttles to and from the games and 4) It’s where I could find a place to stay that didn’t use up the entire monthly budget at one time.

The games:  I grew up in the southeastern part of the USA.  Skiing, ice hockey, ice skating, ect are not things that I could have participated in easily.  I mean we were always taught to never walk on frozen ice because it never gets cold enough to freeze solid and then we’d drown and/or get hypothermia.  SO that being said, winter sports have always fascinated me and I thought that had I grown up in the appropriate environment I’d would excel in biathlon.  I mean I can shoot like a champ and though I’ve never been on skis, cross country skiing doesn’t terrify me like down hill skiing does.

Biathlon does not get any love in the USA.  Its not fast or glamourous or shiny.  I mean they don’t even use real bullets when shooting, but for whatever reason, it fascinates me.  I was beyond thrilled to stand in the freezing cold and watch the biathletes ski and shoot their way to Olympic Gold. 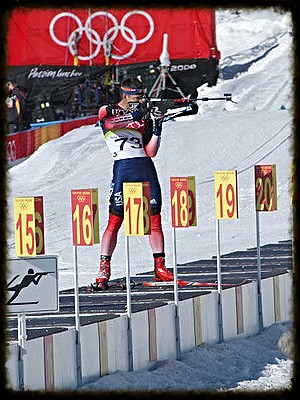 I also got to see some snowboarding… which terrifies the snot out of me… as well as bobsled and luge. No pictures from those events as they were whizzing past much too past for me to get a decent shot.

But bilathalon, though…it was beyond cool to see it.