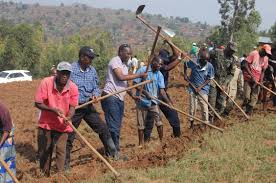 In Kinyarwanda Umuganda translates as ‘coming together to achieve a common goal’, and it was originally started after Rwanda achieved independence in 1962. In the beginning, Umuganda was often called ‘umubyizi’ –and was a day set aside by friends and family to help each other. It officially became a government program in 1974, and today is held on the last Saturday of the month from about 8am until 1p.

Initially, Umuganda did not go over well with Rwandans. Rwandans considered it forced labor, but due to its significant achievements in erosion control and infrastructure improvement – especially building projects– people came to like it and participated in it voluntarily. The 1994 Rwandan genocide disrupted the spirit and practice of Umuganda. It was re- introduced in 1998 as part of reunification efforts. Often times Umuganda projects are still the way community projects are completed.

Who participates in Umuganda?

On Umuganda, Rwandans and others [*ahem Peace Corps Volunteers*] are encouraged to participate. Rwandans between 18 and 65 are obliged to participate [unless medically compromised or pregnant] whereas participation by those above 65 years and below 18 year is optional. To *encourage* participation, public transportation is stopped, restaurants are closed until noon, and most market stalls are closed. [Woe to the PCV who is not in his/her community because getting there is a bitch, and Thanks Peace Corps Rwanda Staff for scheduling almost all our training sessions to end on the Saturday morning of Umuganda which makes getting back to site before dark a real challenge.]

Additionally, Umuganda also serves as a forum for leaders at each level of government to inform citizens about important news and announcements. Community members are also able to discuss any problems the community is facing and propose solutions. So it’s easy to see how umuganda can last all day. Umuganda’s contribution to the country’s development since 2007 has been estimated at more than US $60 million.

Rwanda is often considered the cleanest country in Africa. Rwanda first banned plastic bags in 2008 in an effort to limits the amount of roadside trash. Incredibly, one can be jailed for using plastic bags. [This knowledge did not stop me from smuggling in nearly 250 ZipLoc bags of varying sizes. I know, I’m a heathen.] The tourist sections of the country are incredible clean as umuganda projects are often about cleaning up the roads; however, in the non-tourists areas, rural areas, or ‘real Rwanda’, trash is still a problem mainly because there is no centralized collection. People burn their trash or throw it in the latrine. I’ve personally taken trash from my home (especially plastic bottles) and threw it away when in cities where public trash cans were sometimes available.

Economically, Umuganda adds a lot back into the local economy. Since 2007, Umuganda’s contribution to the country’s development is estimated at more than US $60 million. Like a lot of things in Rwanda, umuganda sounds good in theory but often translates poorly in practice. Sometimes too many people show up for one project; sometime not enough people show up. In the poorer areas, people often refuse to show up especially during harvests because time is literally money. Some people see the value of education; some are too poor to pay school fees and therefore don’t want to waste time on a school.

It’s difficult to enforce umuganda laws if one simply stays home. However, there is a fine of 5000RWF associated with failing to report to Umuganda duty. Here’s a link from NPR about a story they ran in July 2018 about umuganda. Here’s a clip showing Rwanda’s president participating in Umuganda.