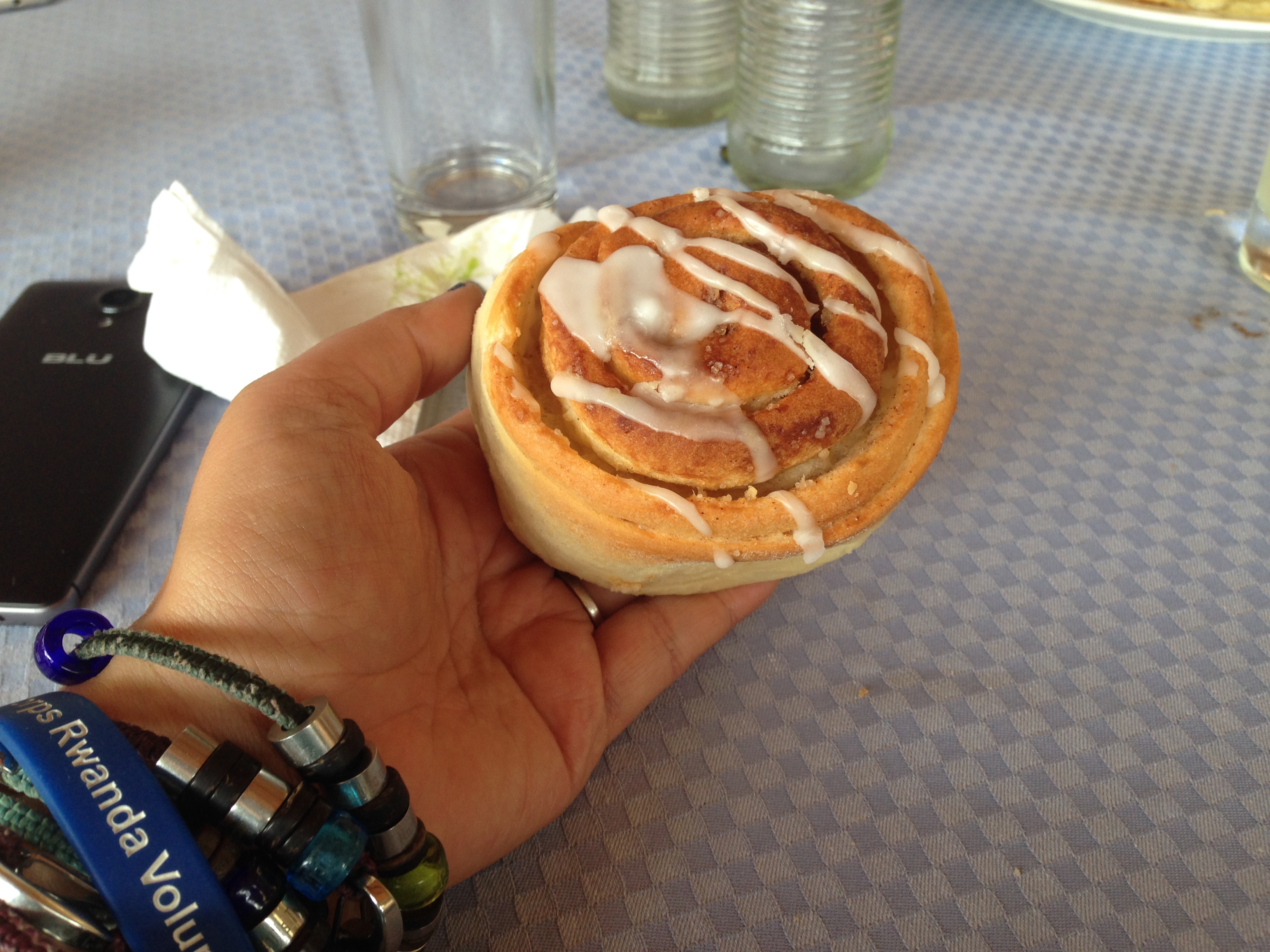 Before leaving for Rwanda, my coworkers attempted to help me study Kinyarwanda… of course, this was fruitless, but entertaining, being that none of us had any experience with a Bantu language prior.  But I learned about 5 words before leaving the comfy confines of the English language… mostly easy words like yego, oya, malariya, and muraho. [yes, no, malaria, and hello].  We laughed because it sounded just-so -foreign.

On our second day in Rwanda, our group of 24 trainees was split into six groups, and I sat beside three other trainees watched our Language and Cultural Facilitators, act out a short dialogue.

They stood a few feet apart, facing away from each other, then turned around and began to walk slowly with their heads down, as if they were walking along a street. Then they make eye contact with each other and one, and upon doing so, one of them breaks into a wide smile and exclaimed “Muraho!” to his freind. On cue, after hearing this, the other also grinned and returned the word. “Muraho!”

The dialogue then came to a quick end. Upon ending, each of our language teachers looked at our group inquisitively. “Iki ni iki?”. They continued to stare at us, in silence, waiting for someone to respond.

I stared right back not knowing what a ichie or a nichie was. I’m a little unusual in the fact that silence does not bother me.  I can sit comfortably in a room full of people and never say a word. I attribute that to my psych background.

Our teachers, still smiling, said nothing but went back and repeated the little sketch, beat for beat. After saying Muraho! to each other again,  they repeated their question: “Iki ni iki?”. The lightbulb then managed to click in someone’s [read: not my] mind. “Oh! They are just asking us what Muraho means.  Someone [read: note me] said “It means hello!”. We all nodded with recognition.  Oh, so this is how language class in Peace Corps was going to go.  I am so fucked…   “Yego!”, they said laughing.

As they continued, some of the smaller and more basic words were written down on flip chart paper [I never knew I could hate an object so incredibly much, but I’ve come to despise flip-chart paper], with their English definitions so we could reference them consistently.

On this first day, our little group buzzed with excitement. The teachers continued to act out small dialogues in lieu of telling us the words by didactic translation. They waved to each other and walked away, saying to each other “Mwirirgwe!” Someone [read: not me]  blurted out ‘goodbye?’ and correct guesses would be rewarded with an enthusiastic “Yego!” and wrong guesses earned a soft and disappointing “Oya…”.

On a random morning about one month In, I thought this to myself as I walk to language class. The thought rattles around my mind with every step down the road.  DoubleLanguage. DoubleLanguage.

No matter how many times I’ve mentioned that I’d prefer both fruit AND eggs for breakfast, I rarely get both.  Some days it’s one or the other, and thankfully not all that often, it’s neither. Today, it just a piece of bread.  Walking to my language teacher’s class, I just kept thinking ‘no snacks today because double language…I need snacks because the sweet bread I got for breakfast just isn’t cutting it.‘

In the one short month I have been here, I have lost nearly 15 pounds and I have learned one thing:  I need protein in order to function. And I need lots of protein to function optimally.  And my Rwandan diet, has been lacking protein  at almost every meal. As a result, I feel sluggish most of the time and randomly emotional.  As every American knows, BREAKFAST is the most important meal of the day and why Rwandans think one piece of bread and tea is a proper breakfast is beyond me.  But here I am.  On the day with double language, my breakfast is sweet bread. And water. Prisoners get better food than this.

But like the time-conscious American I am, I arrive for DoubleLanguage right at 7:45am. I am here because the schedule says to be, and despite my proclivities for being a free-spirit and not planning anything, one thing I am not is late.  Additionally, Peace Corps emphasizes in our training sessions to ‘Respect Time‘; however, none of my classmates nor the teacher are here. So I sit, in a plastic chair and nibble on my sweet bread, and drink my water…  Best to fuel up, I mumble to no one in particular.

By 8:00, my other classmates have arrived and my teacher begins asking questions. All in Kinyarwanda, of course.

The teacher asks ‘What did you eat for breakfast?’

I fumble, my brain searching for the right words.  Oh…past tense… we haven’t learned that yet. Kurya… the verb for to eat… How do you conjugate it again?

M-fee-tay  ke-ke na a-ma-zi…. I sputter out and produce said cake and water as evidence that I do in fact HAVE cake and water…not that I was avoiding the question

And this is how every language class goes.  We are asked questions.  I translate what I think I hear from Kinyarwanda into English in my mind. Then I think of what vocabulary I actually have in order to answer the question, and do I have the ability to conjugate that verb correctly?  Once I run through this scenario in my mind, I compose the sentence in Kinyarwanda and then sputter out an answer that could come from a 2-year old child.

Gusa?  My teacher asks.  She wants me to expand on that phrase.  Make it a sentence or preferably a paragraph.

“Donna-ni-way can-di da-shon-jay”, I answer, with a smirk. I am tired and I am hungry. All day every day, I am tired and hungry. One question down, four hours to go. Class has just begun, and it’s another two hours until there’s a break long enough to get snacks.

Not unsurprisingly, learning Kinyarwanda is considerably different from anything I’ve ever tried to learn in my life.  I’ve always considered myself ‘decent’ at learning languages.  I’m semi-fluent in Spanish and have safely navigated around using Portuguese, French, Romanian, German, and Russian in addition to English and Spanish. But Kinyarwanda is different… just listening to it makes my head spin. I’m six weeks in and I am still very much at an elementary level. I don’t need an exam to tell me that.

My host family has had 8 previous volunteers so they are used to speaking slowly and enunciating words properly and switching to French or English when I answer their questions with blank stares.  Learning a language by immersion is exhausting. It takes a significant amount of mental energy, commitment, and time; and these three things are required every single day. After a long language session, I am exhausted…even more so than days requiring physical labor.

When I hear Kinyarwanda, I have a hard time understanding it. My language progress checks with my teachers also reflect this fact. [Mid LPI result on July 7, I scored Novice-Mid.  Final PST LPI on August 7, I’m up to an Intermediate-Low, but don’t worry, we’ll be tested again in three months where I’m sure I’ll have the exact same level, because this language does.not.make.any.sense to me].

Speaking the language is also difficult, although I would argue it is not quite as difficult as listening. This is in large part because as a native English speaker the sentence structures, particularly of questions, are almost entirely backwards. In Kinyarwanda, question words almost always go at the end of sentences.

For instance,   “Ukora iki”, means, what do you do?; but literally translates to “You do what?”. It is like that for just about everything. You are here why? This is what? The market is where? In addition to putting question words at the end, adjectives go after nouns; this is similar to Spanish. But when you put these two elements together, it forces your brain into cryptic problem solving mode anytime you have to say a sentence with any more than 5 words. When I think to myself a moderately detailed sentence like, “What do your American friends like to do?”, my head spins. The question word goes to the end, there are plural words, there are possessive words, there is one adjective. It all goes completely out of what we would consider “order”: Inshuti wawe muri Amerika bakunda gukora iki?  That translates literally to: Friends yours in America they like to do what? It’s a difficult puzzle to solve each and every time. Don’t forget to blend Gukora and Iki … or they’ll know you are not native Rwandan.

The words for things, and the lack of words for thing captures stark differences between American and Rwandan culture. There is no word for “Please”. You can just tell people to do things, and it’s not considered rude. At all. As evidenced by all the people coming up to me saying ‘Give me money.’ No please.  Just declaring. And I will always think that it is rude. Cultural differences be damned.

Some of my favorite words to say are: