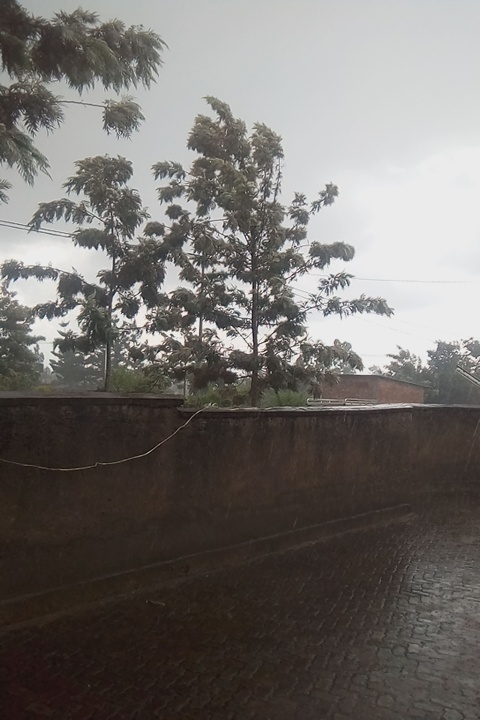 I described the process of being matched up with host families as being puppies at the pound.

Imagine this:  You are placed in a room with about 50 people who you do not know, where everyone is speaking a language you do not know.  All you can do is listen for your name.  And when it is called, you meet up with the representative of the family who will raise you for the next 10 weeks.

I met my Mama, and her first words to me were ‘Parle vous francais’.  Sadly I answered ‘un peu’ and thus began the quiet weekend.

You see, this pairing up happened, for us, on Friday, after just two days in Rwanda, and a fledgling vocabulary consisting of ‘Hello, my name is… I am from America’  ‘Good Morning [evening]’ ‘Good Night’ ‘What is your name?’  I’ll admit to being terrified and saying, to myself, ‘what fresh hell have I engaged in now?’

As much as I want to be settled, I selected a few outfits, 5 days’ worth of underwear, two pairs of shoes, all my electronics, and my pillow. I left a lot of my things at the training center and was grateful that I did.  My Rwandan family’s house is small, and my room is much smaller than I am accustomed to, and even with my two small bags [think carry-on sized] of clothes and electronics, I have more material things than they do.  The Peace Corps’ gave us a 20L jerry-can, a 5L can of water, and rather large water filter.  Additionally, we received a bucket, a small cup, and a bottle of bleach. My goods were loaded in a Peace Corps’ truck, I climbed in after Mama, and then we left.  Approximately three minutes later, we arrived at my new house for the next 10 weeks.

The quiet weekend began as soon as I set foot in the house.  Having  exhausted my fledgling Kinyarwanadan vocabulary and not knowing any English, Mama and I didn’t talk.  I went about setting up my room, ripping the plastic off my brand new Peace Corps’ provided [twin] mattress, setting up my Peace Corps’ provided water filter, and trying to make my Spartan accommodations as homey as possible [it didn’t work].

After about an hour, I hear a knock on the door, and in accented English, I hear “Michelle, do you eat lice?”  Appreciating the English, but not the sentence, I remained silent. Another knock, “Michelle?”  I reluctantly opened the door.  Greeting me enthusiastically with ‘I am Deborah, your host sister.  Mama wants to know if you eat lice?’

It took a few seconds for me to reach back into the dark areas of my brain and remember that sometimes, English as a Second Language learners sometimes mix up Ls and Rs.  After remembering that, I replied, “Yes, I eat rice.”

With Deborah’s help, I learned that in Rwanda, I have a 25 year-old brother who live in Kigali [we’ve never met] and that she is Level 2 at the local school [I’m not sure what that means although there are six levels].  There is not Papa, and I know enough to ask, that when someone says someone is not here, don’t ask questions. [Although seeing as how Deborah is 14, it’s impossible that he died in the genocide that occurred in 1994].

The past two weeks of living with my host family has been challenging. Kinyarwanda is a difficult language with a lot of letter combination that my mouth isn’t used to making. While I can memorize words and may even know what someone is asking me, I lack the vocabulary to make a reply. I also lack the grammar skills to formulate my own questions so I rely on using the infinitive form of every verb along with helpers such as I like, I want, I need.  It makes me sound [and feel] like a somewhat illiterate 2 year old child.

The family eats foods much different than what I am used to eating, and I don’t think I’ve ever eaten as many vegetables in a two week period in my life.  [Although my new strategy of heavily complimenting any food that is remotely ‘American’ seems to be working; I’ve had spaghetti with tomato sauce twice] As a result and with the additional task of walking everywhere, I’ve lost about 10 pounds.  This is not a bad thing, and I have more pounds [kilograms?] to go, but it has resulted in none of my pants fitting me anymore.

Chores are done differently.  I wash my clothes by hand with a bar of soap, and hang them on a clothesline to dry.  Cooking is done on a charcoal stove. Grocery shopping is done daily or at minimum every other day, and with a lack of refrigeration, left-overs are just re-boiled the next day.

Integration has been slow for me partly because of my introverted nature, partly because of my acute awareness of my fledgling Kinyarwanda, and partly because of the compactness of my host family.  I was thinking I have absolutely nothing in common with these people, and nothing to talk about, but last Wednesday when I inquired about maybe, possibly [ pretty plesase] watching the opening match of the world cup, I was greeted with an enthusiastic  ‘YEGO’.  You see, Mama is an avid soccer [football] fan, and she was worried that I, being American, wouldn’t be interested.  Sitting there in the small living room on Thursday night, huddled around the 13” old-school style TV, watching Russia vs Saudi Arabia with my Rwandan mama, I finally felt at home.