Although only a few hours apart and constructed at around the same time, the  ruins of Palenque are very different from those at Tikal. Both sites are awesome in their own way. Both are huge. Both boast of  beautiful, mighty temples. Both are set in a lush jungle. But both served rather different functions. Whereas Tikal was one of the  most important urban Mayan centres, Palenque was a massive  cemetery, with most of the temples used as ceremonial burial  chambers.  Jose, the guide, escorted us through the main buildings including the:

Temple of the Skull: named after the stucco relief  of a skull, thought to be a rabbit skull, on the front of it. 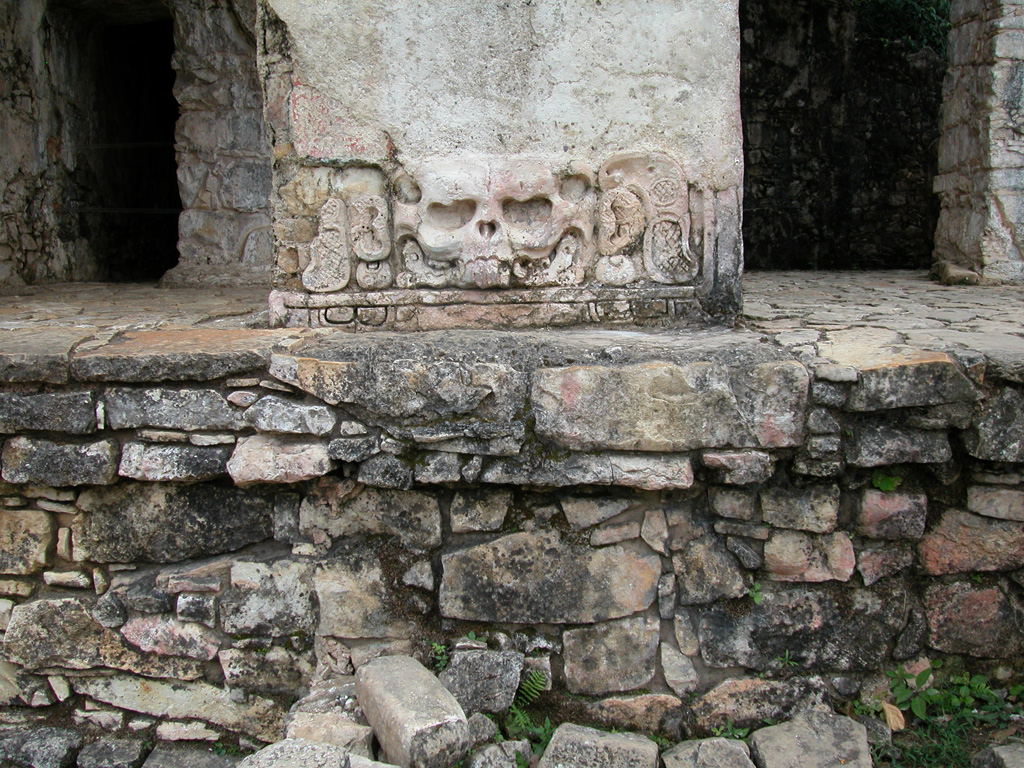 Temple  XIII: where in 1994 the remains of the Reina Roja (Red Queen) were found.  The bones are thought to have belonged to a 40-year-old woman, and had been  preserved in red cinnabar. Although the bones have now been removed [booo], we were  allowed to visit the sarcophagus in the inside the temple and could see the red  pigment still in it.

Temple of the Inscriptions: a 26 meter high  pyramid with 9 levels, so-named because of the inscriptions discovered inside  its walls. In the 1950s a Mexican archaeologist, Alberto Ruz Lhuiller, was exploring the deep bowels of the temple, removed a stone stab in the floor of a back  room and discovered a big old tomb.  It turned out to be that of King Pakal, one of the most important Mayan rulers. He ruled from 615AD- 683AD, and  lived to the ripe old age of 80, which was positively ancient in those times  when most people died by the age of 40.

Apparently he was really tall as  well, unlike most Maya who are super tiny [exhibit A–all of the pyramids they constructed…have you seen those steps?]. Some historians debated  whether he was actually Maya at all, or perhaps came from Europe or somewhere  like that, although most now agree that he was probably just big because he got  to eat all the best food. [It is good to be king]

He’s still in his  mausoleum in the temple, although unfortunately tourists aren’t allowed to go  inside the temple anymore as people have in the past taken it a bit too literally and graffiti-ed it. There is however a replica of the tomb in the site museum which we later visited, and were also shown a video with some  footage of the sarcophagus as Lhuiller discovered it – all covered in  centuries stalactites and stalagmites. Just seeing the pyramids from the  outside is awesome, it must have been absolutely mind-blowing to find all that  stuff inside.

Grand Palace: unlike the others, people weren’t  buried in this one. Instead it was an administrative and  residential block. It’s an intricate maze of courtyards and corridors leading  into rooms with some old beds and  some old Maya toilets. The tower on the top is thought to have been used  for astronomy, although the very top part of it was reconstructed in 1930  according to how a French archaeologist thought it would have looked, but now  they reckon it probably wouldn’t have looked like that after all, but just been  flat. Oops. [those French]

Aqueduct: the Maya controlled the  course of the Usumacinta river which flows through Palenque to prevent  floods and damage to the buildings. There are some pretty waterfalls around  there, too.

Cross group: made up of the Temple of the Cross, Temple  of the Sun, and Temple of the Foliated Cross, a set of tall narrow temples with elaborate carvings. One has a cross on  the top, although it’s not actually a cross, but supposed to represent the tree  of creation.  We also walked along a jungle trail where Jose pointed out  various different types of tree (cedar, mahogany, sapodilla, avocado, mango and  almond), we got to swing on vines Tarzan-style, and also saw several examples  of un-excavated ruins.  The city was so huge that they reckon only about 5% of the structures have  actually been uncovered. Jose pointed out a huge mound behind the Cross group of  temples that is in fact another temple, which must have dwarfed all the others.  There are no plans to uncover it at the moment though as the jungle it is buried under is so rich in wildlife that a lot of poor spider monkeys, howler  monkeys, pumas, jaguars, toucans, parrots and other birds would be made homeless  if they cut it down.  So we’ll just have to make do with the 5%, which is  plenty impressive as it is.