I work with a dude, who is Panamanian in origin, always says ‘get home safe‘ instead of ‘good night’ or ‘bye’.  “Get home safe.” As if I had told him I was headed out in one of the most dangerous places in the world. As if I had said I were going to try bungee jumping or sky diving. Now, while, it’s true I often leave work after midnight, it takes me at most, 15 minutes to get home.  Traffic is very light, and well, I don’t have to worry about roadside bombs or guerrillas hiding around construction barrels. Maybe the occasional drunk driver, but generally there are no worries on my drive home.

Which got me thinking… 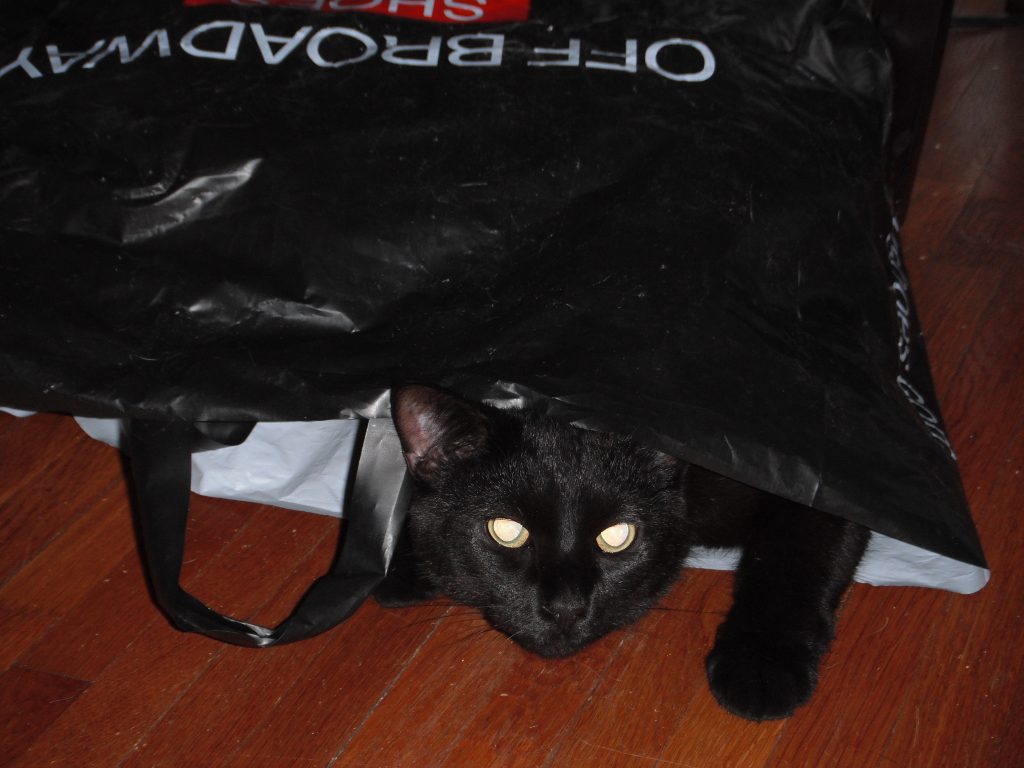 In some places, hiding in a bag is a perfectly acceptable safety measure. Hey there, kitty, kitty. Sometimes it’s hard being a kitty cat.

Why is it that here in the US, we tell people to be careful when they leave–whether it’s leaving work for the day or leaving the country for vacation?  Why not ‘have fun‘. ‘Don’t do anything I wouldn’t do‘. ‘Don’t fall off a cliff‘, or even a ‘I’m totes jelly‘ would be a better send off that ‘Stay safe‘ because being told to constantly on guard is no way to enjoy a vacation or a day off from work. So if you’re going to tell me to “stay safe” when I need my passport, I’d appreciate the same send off every time you say good-bye to me in America. I probably need the safety vibes more here at home.

There are currently 196 countries in the world; various websites take into various metrics when ranking countries.  These statistics are taken from several different sites.

There are 162 countries ranked. [I’m not sure what happened that the other 34 didn’t even get a mention in rankings]

All this to say, more than half of the world ranks higher than the USA in safety.  A lot of the places that rank lower than the US are currently in civil wars.  I’ve been to  quite a few lower ranked countries and felt safer there than in NYC.

My point is, and I do have one, in case you are wondering, the world is not an inherently dangerous place.  If you believe, as the media would have you to believe, every country outside the United States is fraught with peril at every corner, you’d be missing out on 93 countries ranked safer than the USA… including all of Europe [expect Turkey, if you count that as Europe].

I offer only one piece of advice about traveling:  trust yourself. There were periods in my life where I was a bit more cavalier, but these days I am a little more cautious and take precautions to lessen the chance that I end up  in a bad situation. I stay sober and aware of my surroundings whether I am in Asheville, NC or Bogota, Colombia, or Moscow, Russia. Beyond that, I can’t stop random acts of violence on the road any more than I can at home.

There is no one-size fits all rule. Life is about assessing a situation, making predictions, observations, and acting based on those assessments. Sometimes the assessments are off and I make a bad choice. But it is an absolute fact that traveling has greatly increased my ability to size up a situation and a person and make an accurate judgment. I am not the most adventurous traveler by any stretch of the imagination. There are those who do all the big, risky things. That is not me.  I try to push the bounds of my comfort zone just a little, but there are many things I won’t do that others will.

If something serious happens to me on the road it will likely be a transportation based injury — just like at home. Traffic accidents are far more common the world over than tragedies, and fatal traffic accidents far outweigh death from terrorism, plane crashes, or infectious diseases.

According to Bloomberg, on the whole, car accidents are the number 1 cause of death for US citizens abroad.

Now compare this to what people say when I go to Mexico or Colombia. I hear about the drug cartels, getting seriously sick, and the “scary people” who may harm me. The reality is that while precautions for the other areas are needed, sometimes our perceptions are skewed by what outside forces are telling us.

There are many things I may look back and regret in my life, but not traveling will not be one of them.  I have found more true kindness, friendship, and generosity in each corner of the world, in the mostly unlikely of people, and in countries other Americans assume are only filled with foes. People have gone out of their way to extend help when I needed it; times when I was at my most vulnerable — sick, lost, alone. Traveling becomes the sum of human kindness and it only takes a commitment to shifting your perspective to see that.