Once upon a time I had crazy dreams of being a cultural anthropologist or historical preservationist or something that would allow me to travel and be the #historynerd that I truly am. But then the reality of these jobs set in. 1. They are few and far between 2. Most require a masters to even get started, and even finding a program that’s available and affordable is not so easy. 3 most are funded on the whim of a government and therefore pay is low and sometimes not at all. In spite of all that, I chose to do my senior thesis/project on Mayan Art and Architecture which 1. required a thoroughly researched and well written thesis [in Spanish] and 2. on-site visits to some of the sites. This was back in the Dark Ages when the internet was a baby, digital camera quality was awful, and blogging was a journal and scrapbook [of which I have both]. So with my SLR… that’s right, there’s no D if front of that SLR and copious quantities of film that I carried in a separate bag and polite instruction to ‘inspeccione por mano, por favor’.  Thankfully they did and my 50+ rolls of film, both black and white and color, in different ISOs, made it safely through airport security and allowed me to photograph all the little quirks of Mayan architecture to my little heart’s content.

A little history of Uxmal

Chichen Itza is the most well know of the ancient Mayan site, but Uxmal should give Chichen Itza a run for its money –at least in terms of its vastness.  It’s not super well known and isn’t directly on a bus route the way Chichen Itza is, but it is relatively well preserved.  If the access was easier, my guess is that it would be more popular than Chichen Itza. 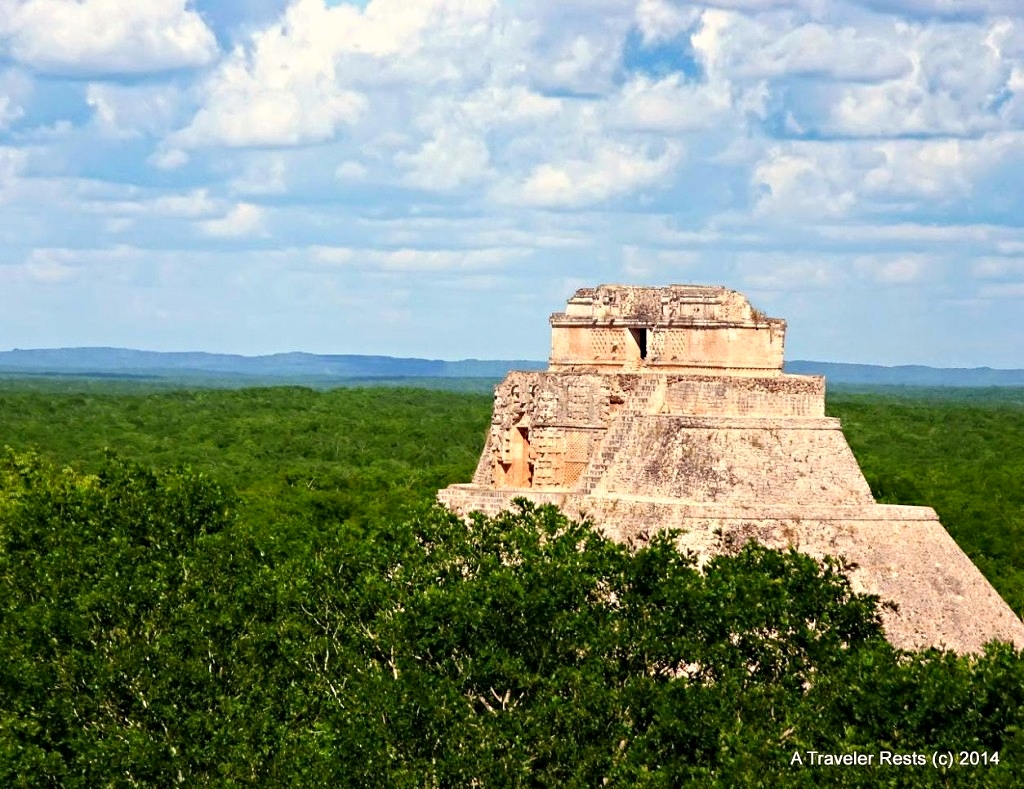 Uxmal rising out of the jungle

The area around Uxmal was occupied as early as 800 BC, but the major building period took place when it was the capital of a Late Classic Mayan state around 850-925 AD.  Somewhere around or after the year 1000, when Toltec invaders took over the Yucatán peninsula [establishing their capital at Chichen Itza], all major construction ceased at Uxmal. However, it continued to be occupied and participated in the political League of Mayapán.  Uxmal later came under the control of the Xiú princes. The site was abandoned around 1450, shortly before the arrival of the Spanish conquistadors.

Mayan legend claims that a dwarf magician, born from a egg, built the city of Uxmal in a single night. In reality, archaeological excavations reveal that the Pyramid of the Magician itself was erected in a series of five successive builds upon existing, lesser pyramids. This was a common Mayan building practice, thought to capture and amplify the power of the underlying structure. 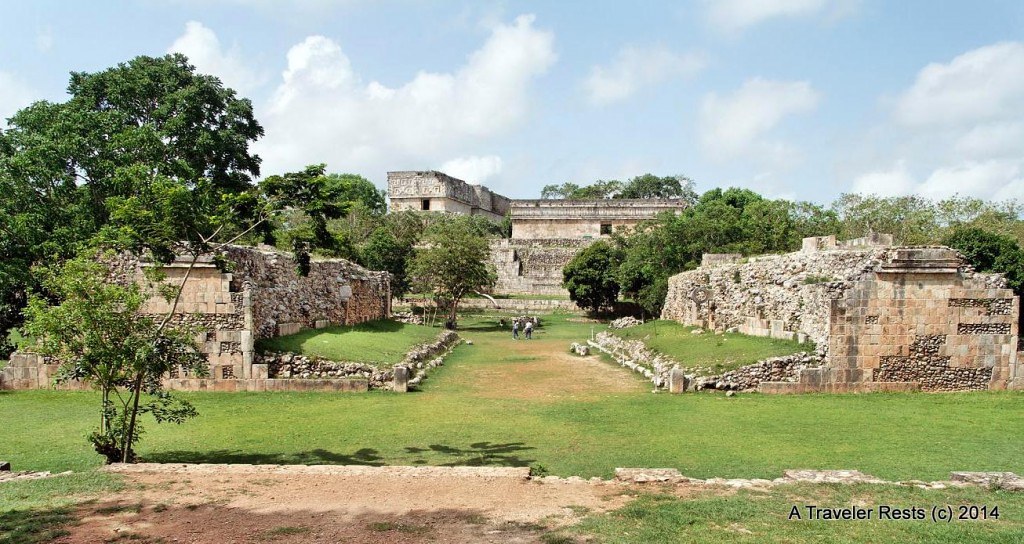 Kabah is situated slightly further along the road from Uxmal, and is famed for the Temple to Chaac, the Rain God of the Maya. The structure is filled with the masks of Chaac. Across the road, there is also a Maya Arch, part of a Maya Road system that used to span the entire Yucatan region. 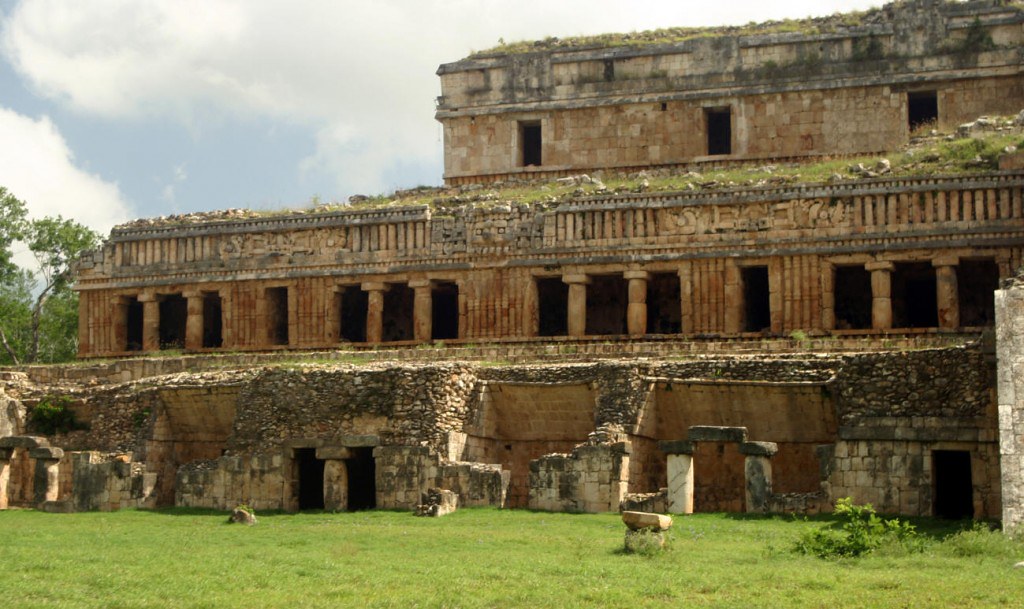 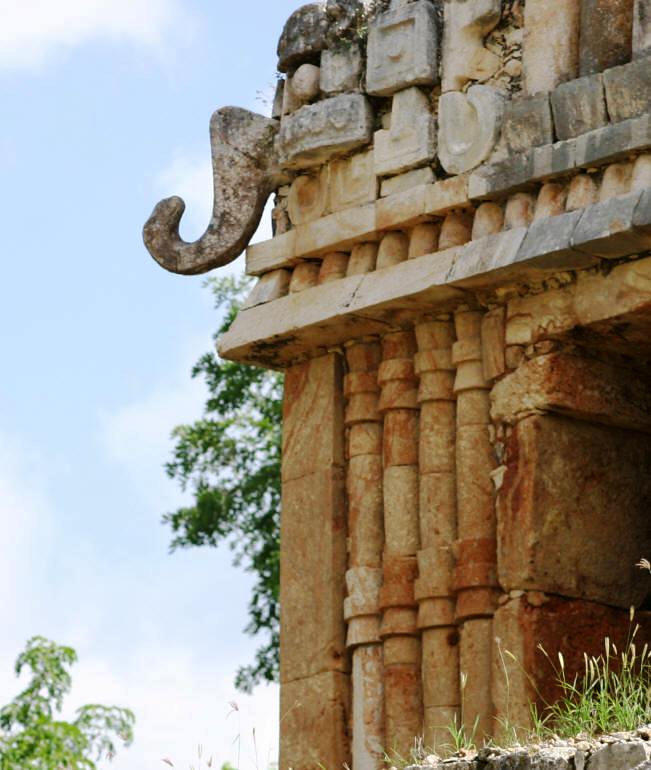 At Labna, you can clearly see an example of a Maya Road system, as well as a well-preserved decorative Maya Arch. The palace is also very beautiful. 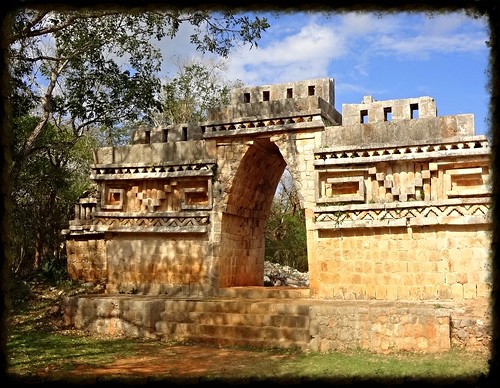 OK enough with the technical stuff…

The area where Uxmal, Sayil, and Kabah is collectively known as the Ruta Puuc, and it is for lack of better terms, deserted. There are plenty of small temples to see as well as small villages [<50 inhabitants almost all of Mayan descent and who speak only Mayan and are ecstatic to talk to you, you know if you can actually communicate. In honesty, most do speak some Spanish, but if English is your only language, you may be out of luck.  Luckily, everyone I met was really nice], and deserted roads almost covered in vegetation. 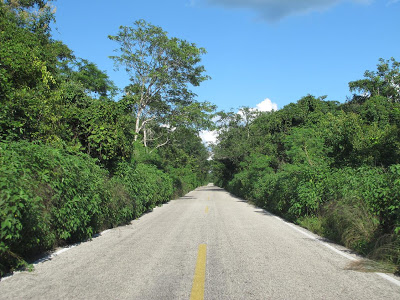 The main road down the Ruta Puuc. I saw very, very few cars and lots and lots of lush, green vegetation.  It is easy to see how the area could be reclaimed by Mother Nature. 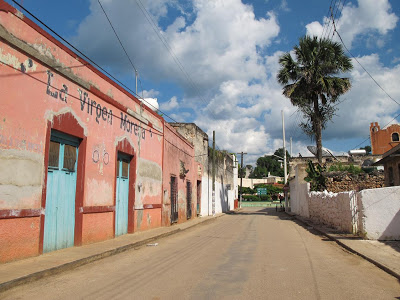 A small Mayan town more or less in the middle of nowhere in the Yucatán peninsula. 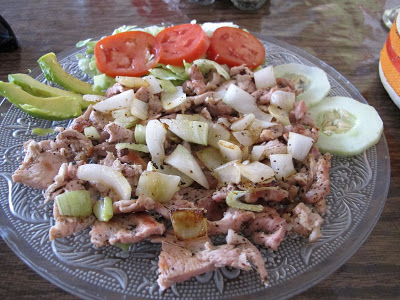 Poc chuc, a very traditional Mayan meal. Essentially it’s seasoned pork with peppers, onions, and lime juice, to be wrapped up in tortillas and eaten like tacos. Tomatoes, avocados, and cucumbers on the side. 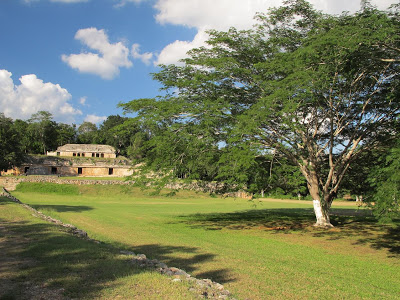 Labna, and when you are the only one there, it’s both awesome, and a little bit creepy.  Yes, I realize I could have been bitten by a snake or some wild animal, and no one would have ever seen or heard from me again.

Some beautiful ruins at Kabah. 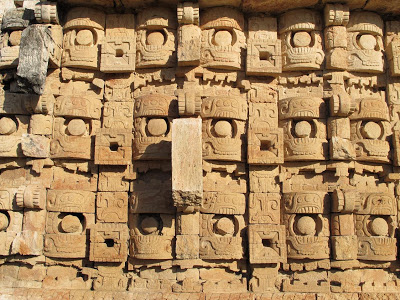 Hundreds of masks representing the gods along the front wall, often with long, protruding noses. 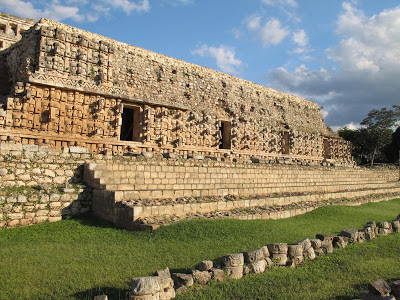 If you look very closely, you can see all of the masks etched in this wall. 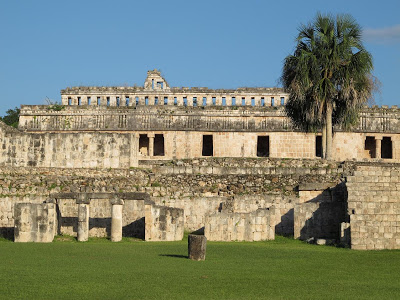 One last view of Kabah. 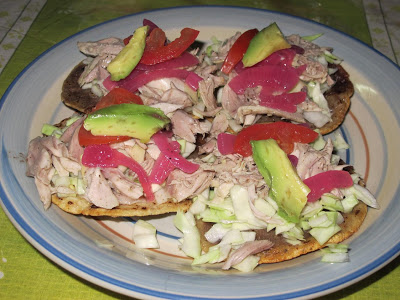 Salbutes. It’s a very common meal in the area, and while not my favorite, it is amazingly fresh, so I had this for a couple of my meals.