Let me preface this was that I never intended to get naked. It was a frigid January day in Budapest, but I wasn’t going to let that stop me from exploring.  Bundled up in all the clothing I had with me, I set out from my hostel in the historic part of Buda. The steam rising out of the drain cover caught my attention first. I paced along the walkway, limbs mechanical yet numb, face frozen, eyes rimmed with weather-induced tears. All the while thinking ” was not made for this kind of weather.” 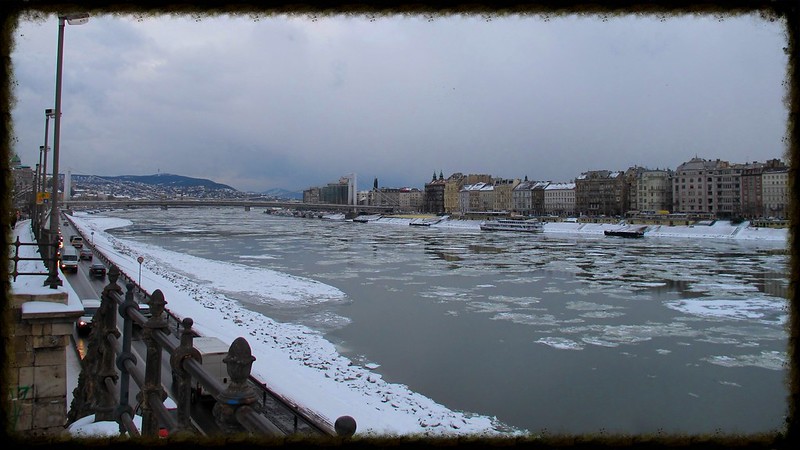 Everyone was cold. I saw it in the hunched shoulders and stooped spines of the commuters who huddled past, bundled beneath thick fur coats, scarves and fur hats.  Which was why the drain surprised me.  Whimsical fingers of mist curled through the gaps, growing thinner as they spiraled up towards the sky. The sky which experience told me still loomed overhead, but which I avoided looking at in case I inadvertently exposed another sliver of my neck to Budapest’s biting air. 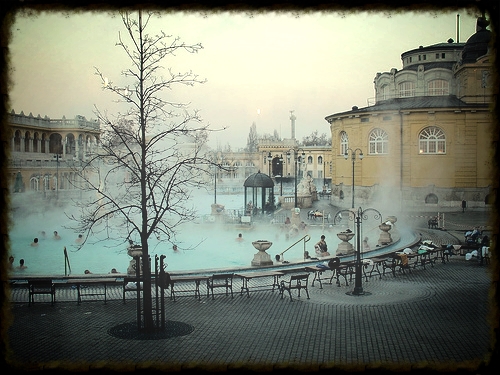 Clouds of steam teased me from the outside–“Was it because the water was really that warm or because it was really that cold?” I wondered.  I knew with absolute certainty that the concrete surface surrounding the thermal baths was freezing cold.  I had no idea whether the ‘thermal’ pool I had just paid money to use would be steaming hot or just slightly warmer than the below freezing winter air temperatures. Hoping that the steam was not a false promise, my toes tested the water below.  A split second passed before I internally began singing the Hallelujah chorus.

Warmth tickled my toes. And it was a small piece of  heaven. I stumbled down the remaining steps sliding deeper and deeper into the warm water.  I am sure people stared at me when I let out an audible sigh of relief. Luckily, it wasn’t too crowded at this bathing suit optional bath I had chosen to immerse myself in. Not knowing exactly what to do, I just sat there, naked, in my pool of hot water… watching snowflakes get eaten up by the steamy waters.

Budapest is well know for its thermal baths and Szechenyi didn’t disappoint.  It has held the title “City of Spas” since the year 1934, as it has more thermal and medicinal water springs than any other capital city in the world. There are 118 springs in Budapest, providing over 70 million liters of thermal water a day. The temperature of the waters is between 21 and 78 Celsius.  Budapest’s thermal waters were enjoyed by the Romans as early as the 2nd century, but it was only during the Turkish occupation of Hungary in the 16th century that the bath culture really started flourishing.  Today, there are 15 public thermal baths in Budapest, not counting the private thermal spas established in some luxury hotels, such as the Ramada Plaza, Thermal Hotel Margitsziget and the Corinthia Royal, which have their own spas that you can enjoy.

In some of them you can even keep your clothes on.