It was twilight by the time I finally dropped my pack on the ground nearly twelve hours after my day had begun. My legs didn’t ache as bad as I anticipated and my neck and shoulders didn’t pinch the way I feared. Considering how nervous I was in the days leading up to my “rim to rim” hike through the Grand Canyon, I considered Day One a resounding success.

I arrived in Las Vegas four days earlier, jet-lagged, road weary, exhausted and increasingly worried that I would not be able to handle this trek. However, at the orientation meeting the night before, the guides went through our itinerary and emphasized the importance of going at a comfortable pace. With two of them, one would always be at the front and the other at the back, meaning I didn’t have to worry about getting left behind if I went too slowly!  Score!

The group departed Flagstaff shortly before 7 a.m. for the drive to the north rim of the Grand Canyon. After one stop at the Navajo Bridge crossing the Little Colorado River, we arrived at the north rim just after noon.

Day 1:  This day’s hike is entirely downhill… 7 miles and drop 4,000 feet! . I was immediately amazed and surprised by the scenery – so much more colorful and so much greener than I expected! The trail was dirt and rock, but not nearly as slippery as I thought it might be. I rarely felt like I would lose my footing. With a fairly narrow trail, my little group of 6 hiked single file. 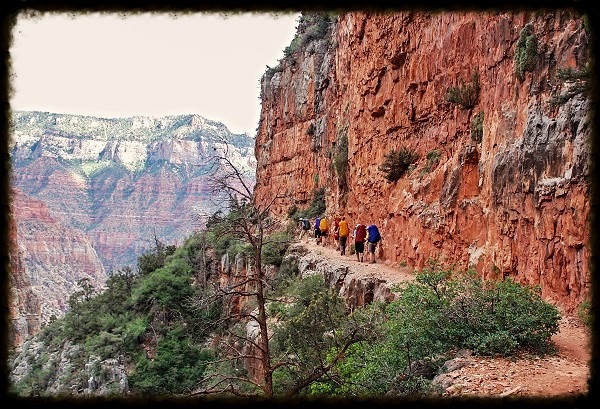 The narrow trail, and my little group making the way one-by-one.

I caught my first glimpse of the agave plant and of tiny circular shaped cacti with flowers of yellow or fuchsia. I had to control my urge to stop at every turn to take pictures! 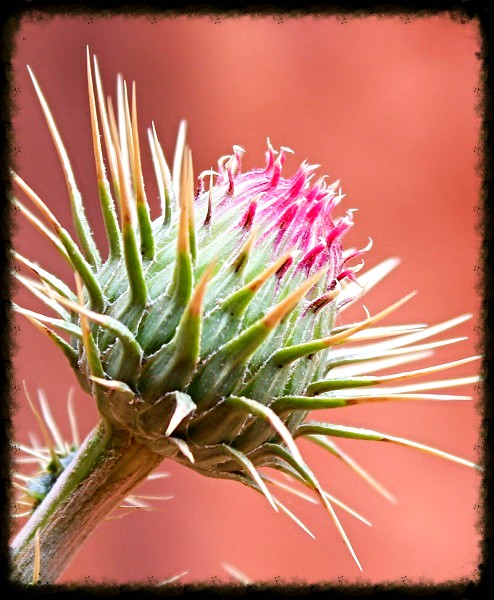 As mentioned earlier, the hike didn’t start until about 1p. It was overcast when we started, and like clockwork, soon after the hike began, it started to rain. The rain wasn’t entirely unwelcome as it helped to cool me off. We were already lucky to be walking in the afternoon shade. It was probably the best possible weather we could have asked for. It was just a shower, and unlike at home, the air didn’t turn unbearably humid after the short lived shower, and the skies were clearing as we reached camp.

Home for the night was a campground where we had a group primitive campsite reserved. Nearby was a water fountain with potable water and toilets that, while not flush-able, were at least composting so we could put the toilet paper down. Pack in-pack-out is kinda nasty when that includes carrying around used toilet paper. 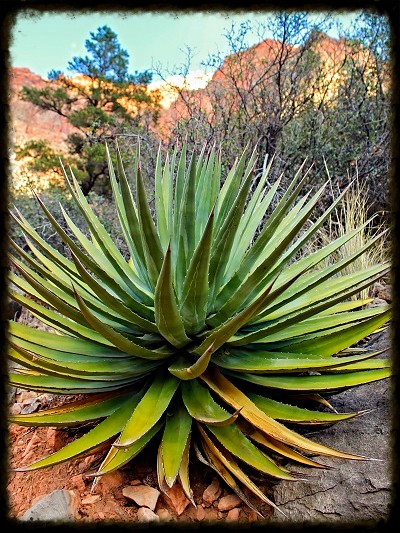 Day 2 started out with a bang. Literally. It was about 4AM on day 2 of my rim-to-rim hike.  Pitch black dark, chillier than I would have liked, and I had to pee.  I grabbed my headlamp and boots [but didn’t lace them all the way up!] and made my way to the toilets.  No spiders. No scorpions. No snakes.  Completely uneventful until BAM!  The Earth jumped up and hit me square in the face.  I slowly got up and wiped the dirt off my pants. Sitting down at the picnic table in the dark, I aimed my headlamp at my foot to get a good look at my ankle. I had just tripped over a large root between the picnic tables at our campsite, turning my ankle in the process.  It hurt, but nothing major.  I’d sprained my ankle many times in my sports career so I was sure that was what had happened this time. So I applied the ankle brace that I carry with me in my first aid kit on all hikes.  Socks on.  Boots laced up tight, and on my merry way.

The goal was to be on the trail by 5:00, arriving at Phantom Ranch at the bottom of the canyon by 9:00 or 10:00, escaping as much of the canyon heat as possible. Despite the early rising, we didn’t get everything together to actually leave camp until after 5:30 a.m. Needless to say, by the time we got going, I was ready to hit the trail.

Day two was another mostly downhill hike, although much flatter than day one. Early on, we made a detour to Ribbon Falls, a small waterfall tucked away several hundred feet off the path. 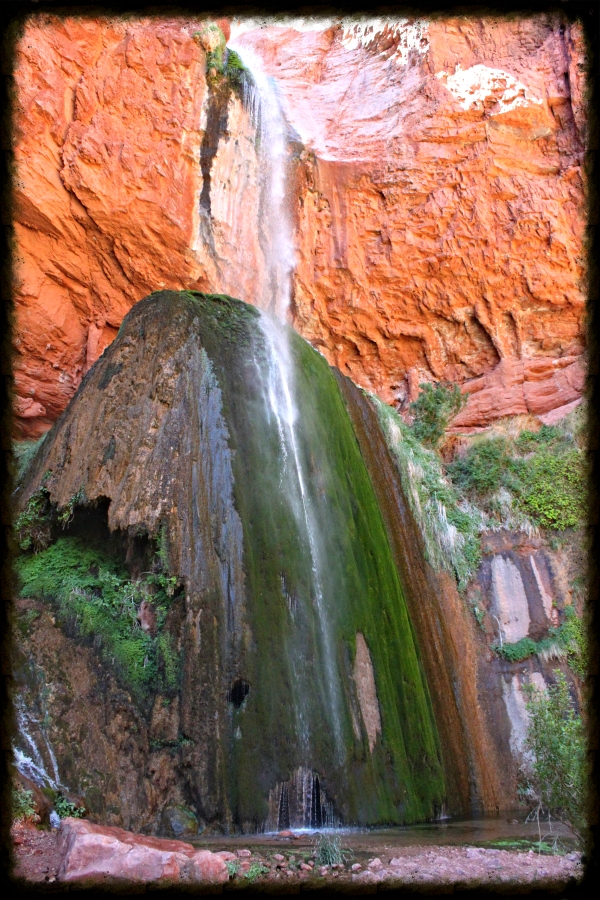 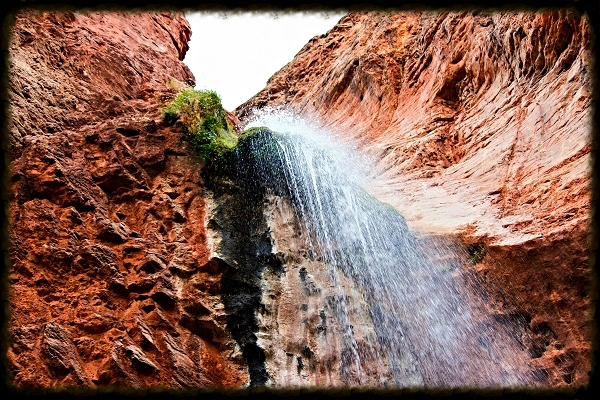 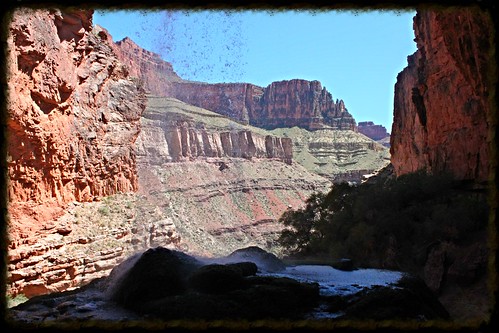 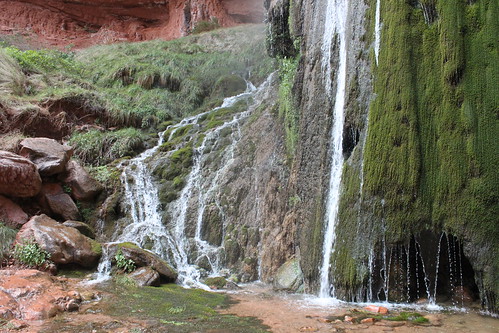 We alternated between shade and sun and followed mostly red dirt paths through the canyon. The scenery continued to amaze me with its diversity and the rocks continued to change as we descended further into the canyon. I smiled at the sight of sparkly quartz along the path – such a contrast to the rough limestone and the red dirt. The final leg into Phantom Ranch and to our campsite at the Bright Angel Campground was the toughest because it was the hottest. Can you say 104F – in the shade! But it’s a dry heat, they say. They can suck it. It was hot as blazes. Luckily, the campsite came with a stone shelter so we quickly dropped our packs and took off our shoes to relax in much needed shade. As I did, I checked out my ankle, which was suddenly throbbing as I removed my boots and brace. The skin around had turned a bunch of pretty colors. And then I realized I could hardly move it. Well,fuck! It suddenly occurred to me this *might* be more than just a sprained ankle. 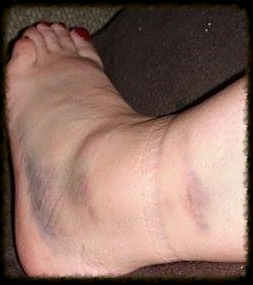 oops!–look at that bruising and swelling

Luckily, Phantom Ranch has a cantina so I was able to buy a bag of ice for me to ice the foot a bit. The campsite was also near a creek so I could sit on the edge and soak my feet in the cold water. Because we arrived so early, I had the whole day free and I took advantage of the opportunity to enjoy some alone time – for an introvert like me, it was much needed after being around other people for the last 36 hours. I hung back at camp before heading to the cantina for some air conditioning and lemonade. Then I returned to camp to read, snooze and ice my ankle once again.

Here’s the thing about the hiking the canyon: Personally, I think everybody who can, should. The Canyon is truly one of the wonders of the world; one exhausts superlatives describing it. Every twist in the trail brings a new wonder; one walks in beauty and lives in awe.

The Canyon is also humbling, incredibly so. Our egos, our self importance, our absorption in the fleeting concerns of our lives, all shrink into insignificance before the awesome magnitude of the Canyon. The scale is beyond comprehension; we reveal ourselves to be the tiniest motes of dust within its walls.

The Canyon reminds us not only that we are tiny specks, it tells us that the vanity of our existence is but a blink of an eye. When travelers reach the Canyon’s bottom, they walk among rocks formed 1,800,000,000 years ago. A third of their time has passed in the sterility preceding this planet’s first life. Humans have been around for barely one ten-thousandth of that time; what loosely passes as civilization accounts for only 1/200,000th of that period.

Humility and awe. It’s good for the soul. Hike the Grand Canyon to discover wonders you’ve never imagined, to realize how small we humans really are.

Coming Soon: Communing with nature in the Grand Canyon: Part 2