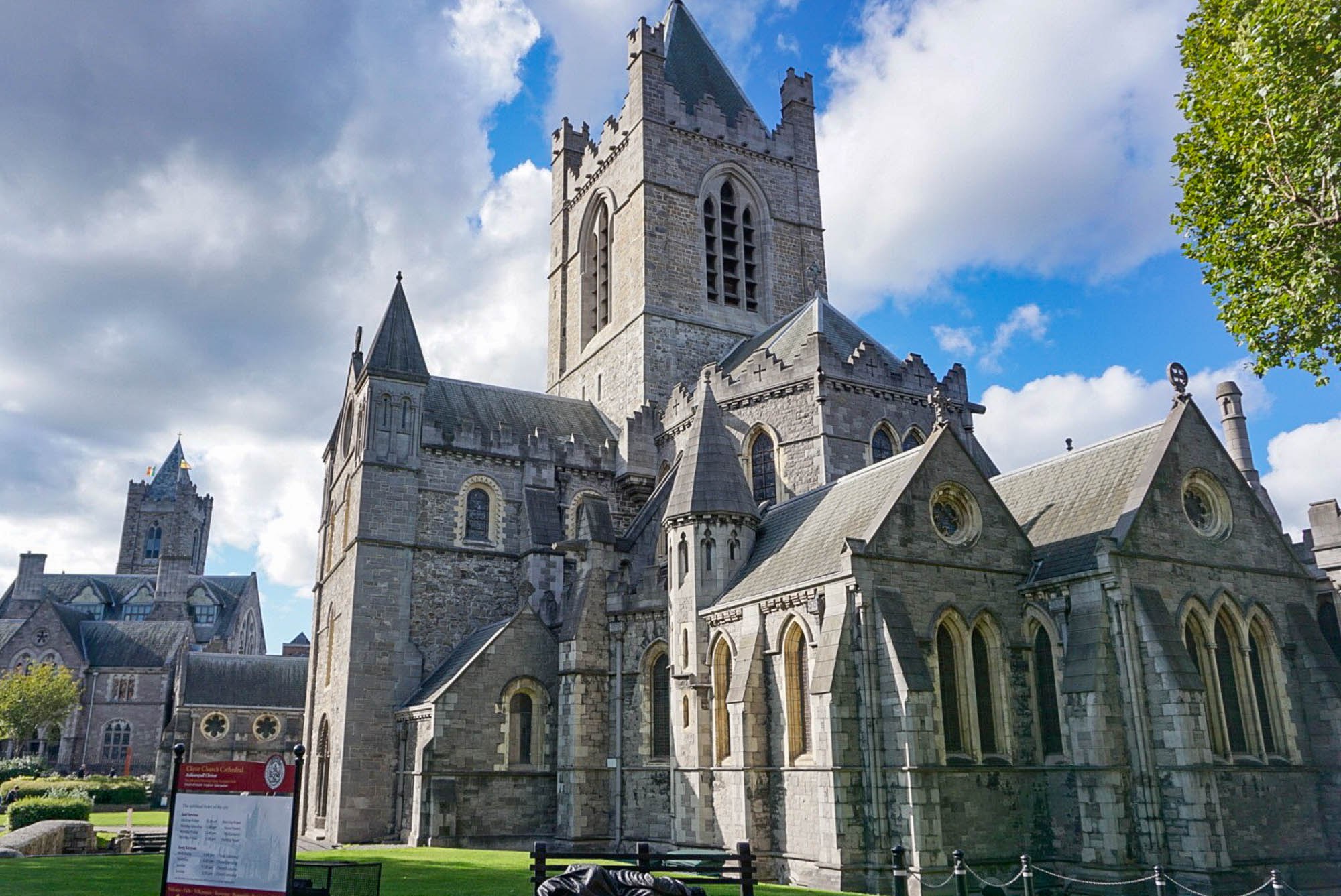 A person can learn a lot about a country by the symbols the country uses to represent it.  It tells you a lot about Ireland that the symbols of the country is a musical instrument , a harp facing in one direction. And the unofficial symbol of Ireland may just well be a pint.  Of Guinness to be exact.  A Beer that uses the National symbol isn’t all that uncommon, but music and beer–well, that tells you a lot about Ireland, doesn’t it?

See, music and beer. Throw in a few writers, poets, and books, and you have Dublin in an overly-simplified nutshell

Trinity College:   Nowhere in America is there a 400 year old college much less a 900 year old book. Trinity College is a contemporary college still accepting students; its building are a mix of architectural styles from 400 years to present. And during spring and summer, it’s elegant gardens are truly a sight to behold. I love visiting college campuses… especially well done ones, and ones with spectacular libraries.  The Old Library at Trinity is amazing: stack and stacks of ancient wooden bookshelves filled with ancient (and not so ancient) books that seem to go on endlessly.

And while Trinity College is certainly something to be seen, my absolute favorite part of the college is the Long Room in the Old Library at Trinity College. The room is a book-lovers dream (and downstairs you can see the famous Book of Kells).

Kilmainham Gaol: Maybe it’s my dark, twisted soul that has me visiting things like cemeteries and jails wherever I go, but Kilmainham Gaol is Irish revolutionary history in living color.  Constructed in 1796, and used as a prison for the city of Dublin through 1924, the uprisings of 1798, 1803, 1848, 1867 and 1916 ended with the leaders’ confinement here. Robert Emmet, Thomas Francis Meagher, Charles Stewart Parnell and the 1916 Easter Rising leaders were all visitors, but it was the executions in 1916 that most deeply etched the jail’s name into the Irish consciousness. Of the 15 executions that took place between 3 May and 12 May after the revolt, 14 were conducted here. As a finale, prisoners from the Civil War were held here from 1922.

While the revolutionaries are certainly the most (in)famous citizens of the prison, Kilmainham Goal hosted men, women, and children during its nearly 130 years in operation.  While some inmates were there for crimes such as murder and assault, others were there for theft of food to feed a starving tummy. The jail closed in 1924, but happily these days, one can tour the jail and the tour leads you through old, crumbly prison cell-blocks and ends in the yard where the  hangings used to occur.  I’m not one to be superstitious, but if any place is haunted, I’d imagine this place would be.

St. Patrick’s Cathedral:  Construction began in 1191; it became a cathedral in 1224.  Yep, it’s over 800 years old… kinda makes the 400 year old college [Trinity] look like a spring chicken, and most surprisingly [to me] it’s not a Catholic church.  The most famous church in a country known for Catholicism is Anglican.

Take a tour of the Guinness Storehouse, which may just be Ireland’s top tourist attraction. Yes, more people come here than visit the Book of Kells or the Cliffs of Moher. For around 15 Euros, you can tour the 7-story building, learning  important things like the history of the Guinness, how it’s produced, and how the it has evolved over the years. At the end of the tour, there is the chance to enjoy a complimentary pint at the Gravity Bar (although for 15 euros, in my opinion you should get something).

I was 19 years old the first time I visited Ireland and some of my first alcoholic drinks were in Dublin, because how can you not? While the taste of a Guinness never took,  Irish Whiskey most certainly did. Especially in the form of Irish Coffee… There’s a reason Irish Breakfasts are a thing, and Irish Coffee is a great addition to it.  Jameson’s distillery was the first distillery I ever visited and those smooth triple distilled grains are like sweet honey. Even though I’m not a huge coffee drinker, the combination of whiskey, Irish cream, and coffee is pure magic.

The Temple Bar, I guessing at one time, was authentically Irish.  These days, its just another overpriced bar, with a great location, that caters to tourists.  For the love of all things holy, go somewhere (anywhere) else to get an authentic ‘pub experience’.  The are literally hundreds of pubs in Dublin and I’d wager than any one of them not located in the city center would be a better experience than the Temple Bar. I’m not saying to not go to the Temple Bar, just know that these days, you’ll rarely find a local hanging out there.  One cool thing about the Temple Bar, is there’s always live music playing so pop in, if for no other reason than to listen to a tune or two.