Most people would struggle to place Suriname on a map, often even placing it on the wrong continent [I don’t know; it just sounds African]  Suriname is South America’s smallest country, and I’d wager that if I asked 10 people, at least 5 wouldn’t be able to point it out on a map [and I’m being generous].  I never planned on popping in Paramaribo, but the chance go truly go off the beaten path lured me in.  As a former Dutch colony, you’ll see places like Onafhankelijkheidsplein on street signs and maps [that really just means public square], but as a Caribbean country you’ll hear languages like English, Creole, Dutch Indonesian, and Chinese. This little gem, formerly Dutch Guiana, sits in the upper corner of South America, between Venezuela and Brazil and more specifically between its colonial brethren, Guyana and French Guiana.  The mix of culture, food, language and architecture makes for a very interesting city, reflecting influences from Dutch colonization, Indonesian workers, West African former slaves, Indian workers, Chinese laborers and many more.  The mix of races, religions and languages doesn’t work for many cultures, but from the small glimpse that we saw, Paramaribo does a remarkable job in making it work.

Parbo, as it’s called, pulls together influences from many different cultures, and it somehow seems so effortless.  Locals switch back and forth between 2 and 3 languages, mosques sit next to temples, synagogues and churches, streets are lined with Indian, Creole, Chinese and Javanese food, along with a McDonalds or fried chicken shop to round things out. As a tiny historical fact, Suriname gained notoriety as being the area that the Dutch traded for in exchange for the UK acquiring some land in North America [ever hear of New Amsterdam?  No, how about New York?]

(On Sundays, locals gather on Independence Square to face off in a bird chirping competition.  Yes, you read that correctly.  Wagers are placed and the birds face off in a chirping/singing competition.  Unfortunately, we missed the actual event, but we showed up just in time to see a few of the cages of small birds still set up in the plaza and being slowly loaded away for next week’s match-up.)
The inner city of Paramaribo is designated a Unesco World Heritage sight for it’s mix of architecture and preserved history.  Also there is a tremendous amount of wooden structures that one would not necessarily associate with the Caribbean.
I’m sure things are not 100% perfect, but the way the city finds a way to blend so many different cultures, races and religions is most impressive.  True ecumenical spirit is hard to find these days. And by these days I clearly mean 1723–which is when the synagogue was built. 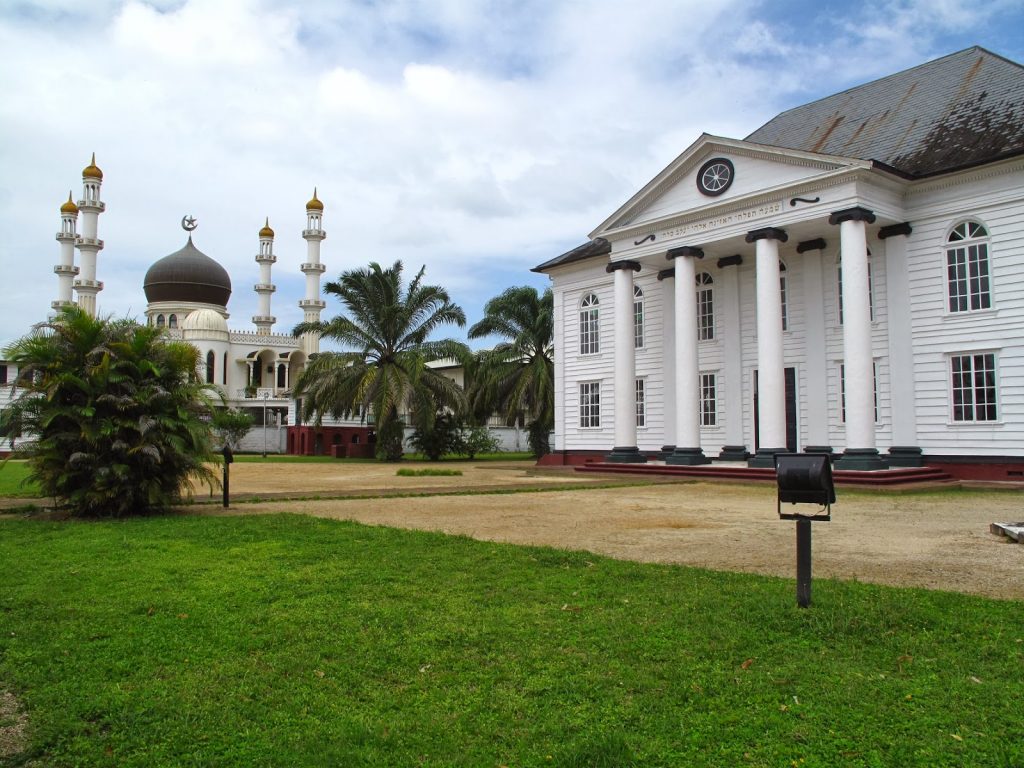 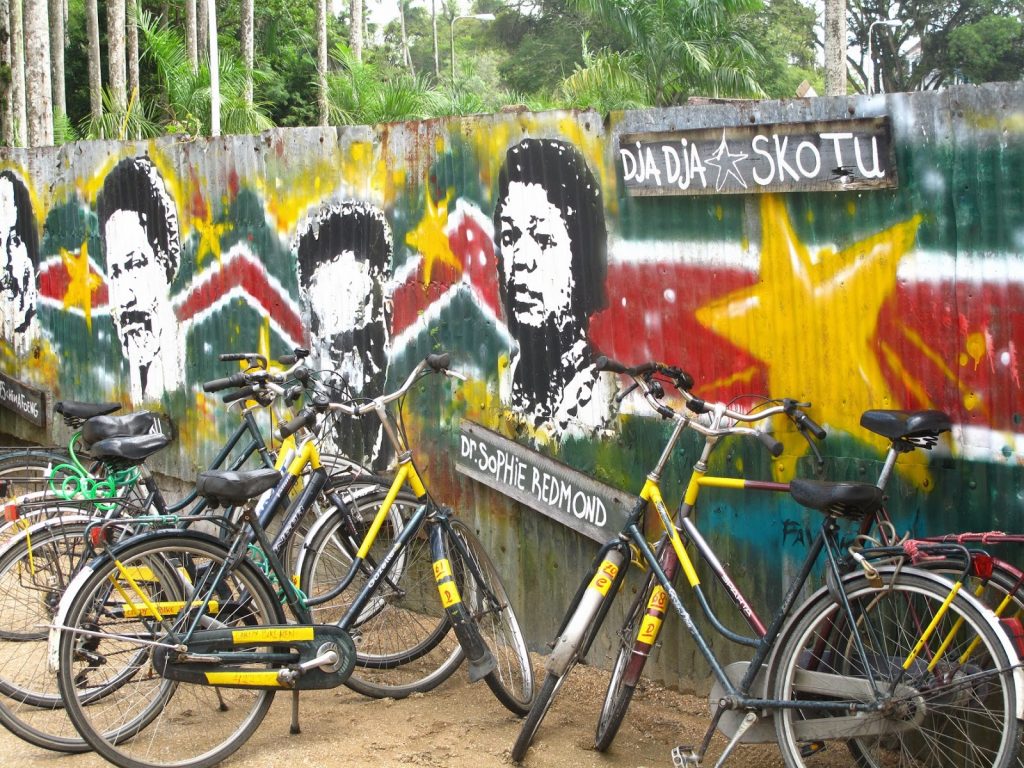 What would a former Dutch colony be without bicycles?  Paramaribo has a plethora of them .The Dutch also added to their legacy by building a large series of canals to help drain the city, part of which sits below sea level… not unlike another Dutch city that starts with an A and ends with dam.) 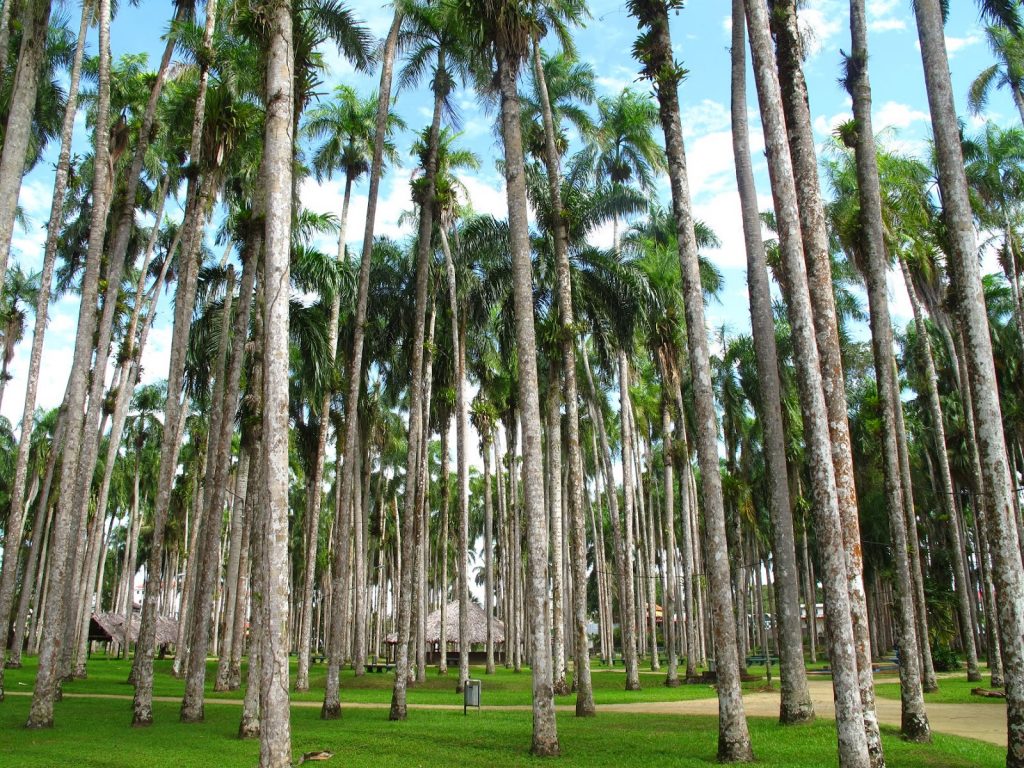 The palm gardens [Palmentuin] are just behind the presidential palace. Back in the day, only the leader and his acquaintances could enjoy the space [because let’ be real, there were no female leaders ‘back in the day’].  However, modern times prevail and the palm gardens are open to the general proletariat such as myself. 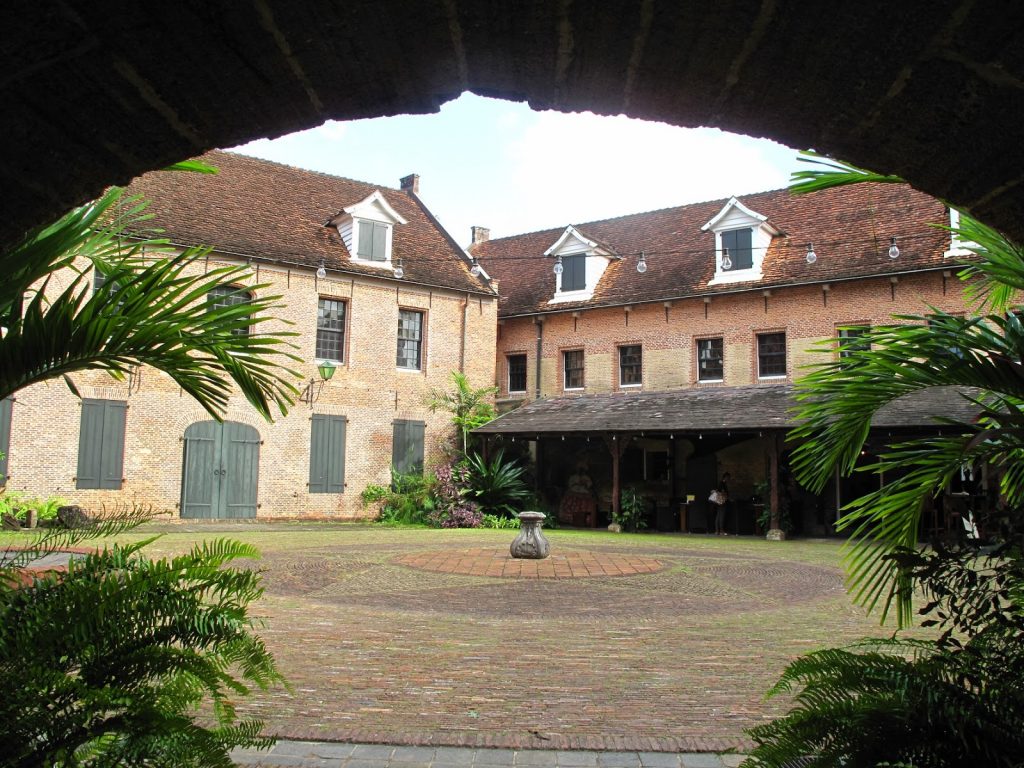 Fort Zeelandia has an interesting history. It was originally built in 1640 by the French and was completely made of wood.  It was later captured by the English and  renamed Fort Willoughby. In the 1650s more Dutch settled in the area and in 1667 Dutch Admiral Crijnssen took Paramaribo and recaptured the Essequibo-Pomeroon Colony. The battle which ensued between the English Admiral William Byam and the Dutch Admiral Abraham Crijnssen lasted only three hours. Why? you may ask.  The British ran out of gunpowder and munitions.

Adm. Crijnssen renamed the fort once again, and Fort Zeelandia remained Dutch until 1975 [ because #historynerd].

But Suriname has a dark side too.  It’s relatively unknown to foreigners because most foreigners couldn’t even find Suriname on a map. It’s ‘president’, a dictator really, is also wanted for murder [for his role in the Bloody December of 1982] and by Europol for importing over 1000 pound of cocaine into the Netherlands back in 1999.  But you wouldn’t know this unless you researched the country ahead of time and if the Number 1 Google search for Suriname is ‘Where is Suriname?’, it’s a safe bet would-be tourists don’t know about the king-pin cocaine drug lord/murdered turned president [dictator].  But Paramaribo feels safe; there is no heavy military presence so one would not expect its leader to be a criminal… 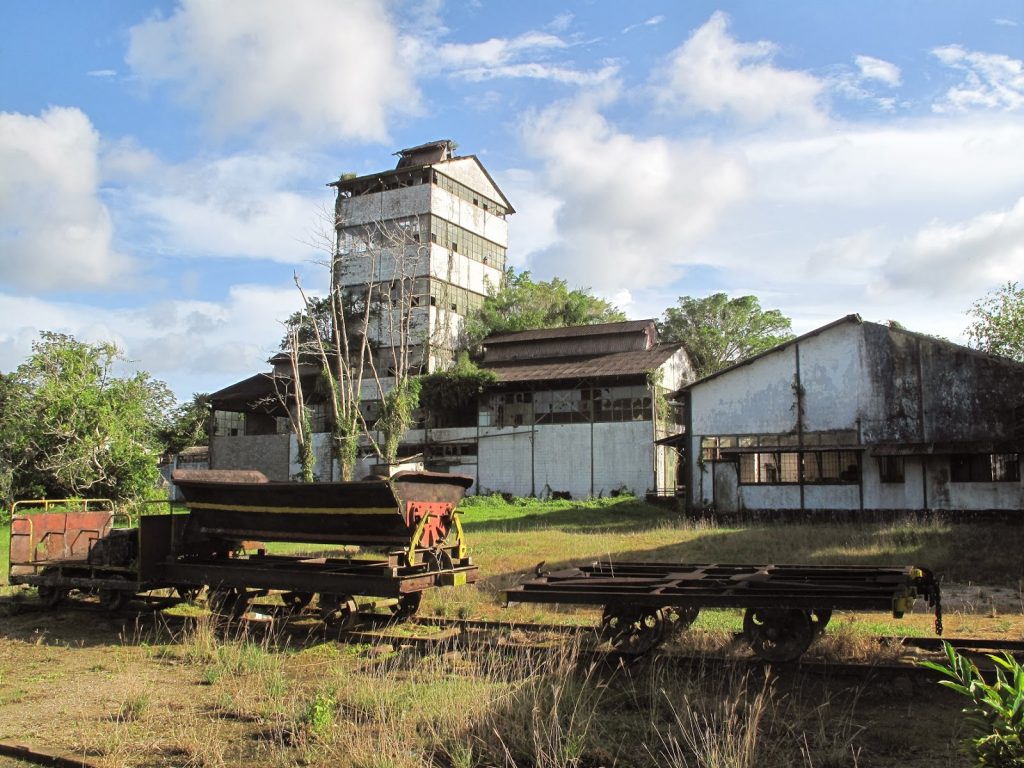 The area used to be home to a lot of sugar plantations/mills, but when the Dutch pulled out, the sugar industry dried up too. 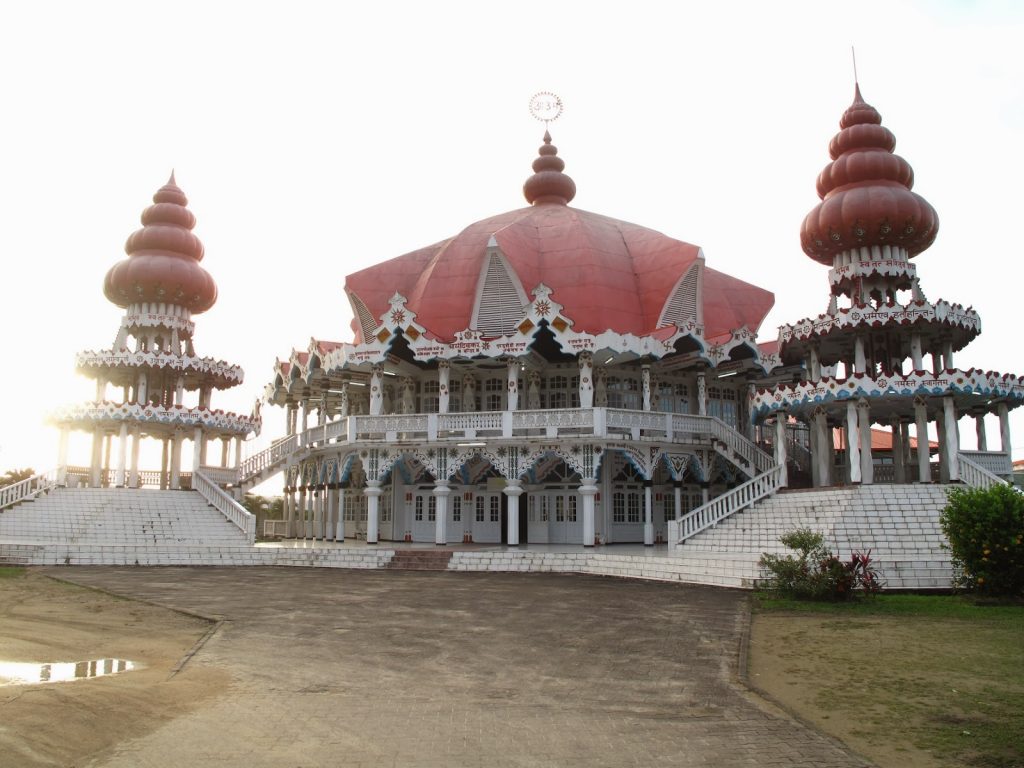 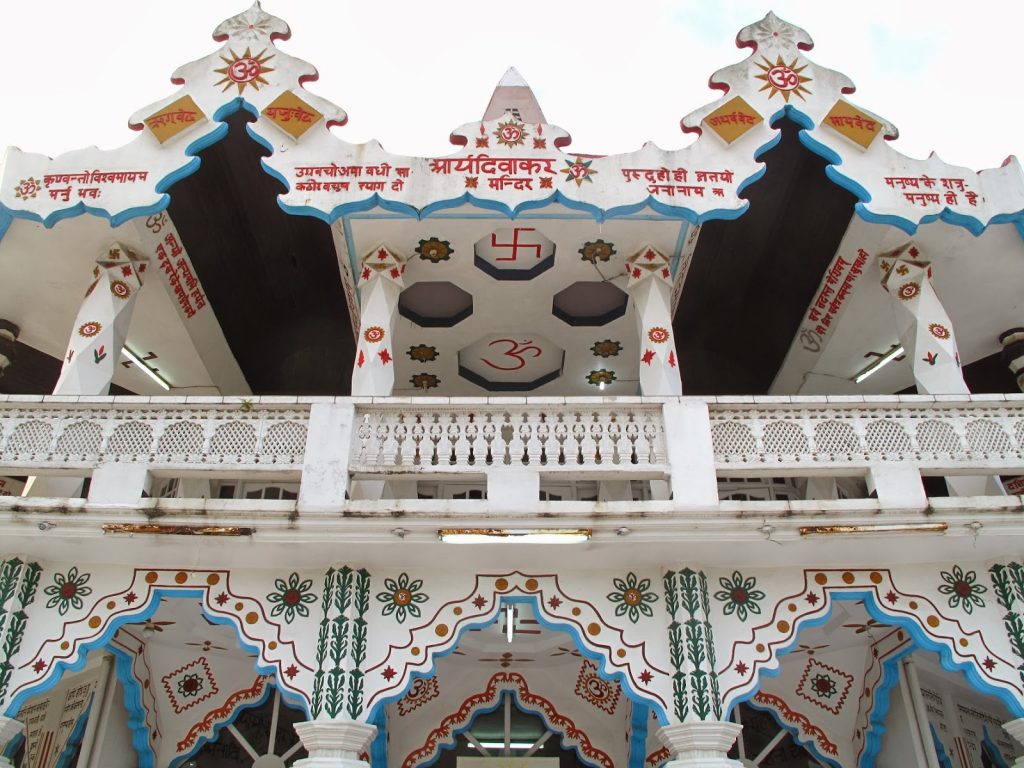 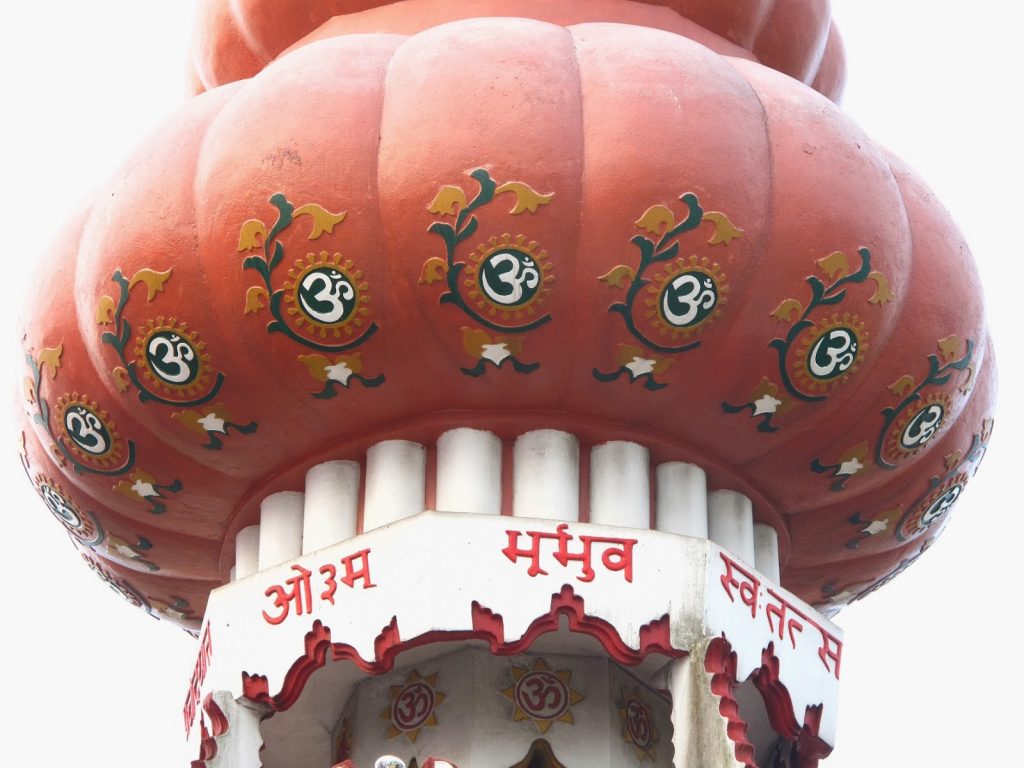 The Arya Dewaker Temple.  and a message written in Sanskrit—probably something religious.

November 6, 2011Leave a Comment on Sliding through SurinameWanderlust
Tags #historynerd off the beaten path Paramaribo Suriname