Arequipa, the second largest city in Peru with approximately 1 million city-dwellers, was formed by Spaniards in the 1500’s after conquering the Incas. As you enter the Plaza de Armas at the heart of Arequipa, you’ll feel as if you’ve stepped into time and place outside of modern day Peru. Surrounded by 3 volcanoes, the view from Arequipa would have been reason enough for the Spanish to settle there. The sillar from these volcanoes is what forms much of the architecture surrounding the Plaza de Armas and crowns Arequipa as the white city. At 7640 ft (2300m) above sea level it is not the highest city in Peru, but it still has an altitude associated with some of the higher cities. If you are coming straight from Lima, you’ll definitely feel it; if you are coming down from Cusco, you’ll hardly notice.

If you’ve been to Machu Picchu, you may think that nothing can top that.  And while it’s true that Machu Picchu is amazing (or at least I’ve heard it was pretty awesome), but Arequipa can certainly hold its own and is well worth exploring and a great starting point for many other outdoor adventures in the area. Want to hike into a canyon?  Or go white water rafting?  Or explore volcanoes?  Arequipa is the perfect place for all that. Want to learn about the naughty nuns?  The ice princess? Or are you OK with just people watching.  Once again, Arequipa is the answer.

My weekend in Arequipa went something like this:  People-watching, nerding out on history, hiking down the world deepest canyon, people watching, and market exploring.  My sole reason for coming to Arequipa was to visit Colca Canyon.  I am not missing out on another awesome hiking expedition 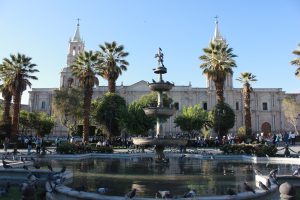 One of my favorite things to do is just hang out in the square and people-watch, and the Plaza de Armas is the best place to do just that.

Nerding Out Part One: The Santa Catalina Monastery is one of the main tourist attractions in Arequipa and anytime I can get a glimpse of nuns behaving badly, I’m all in.  As a bonus, the cafe was serving apple pie and lemonade so I indulged my appetite after indulging my nerdy side. 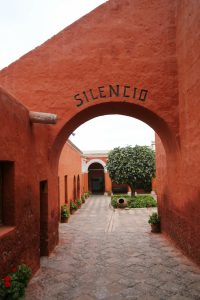 Nerding Out Part Two:  After the monastery, I checked out the Andean Museum to see the “ice maiden” Juanita – the body of a young Inca girl found completely preserved (frozen) at the top of a nearby volcano.  To go in, you have to do a guided tour, which includes a 20 minute video about the discovery of the body.  The guide told us about the sacrificial rituals and the other artifacts found with Juanita’s body. 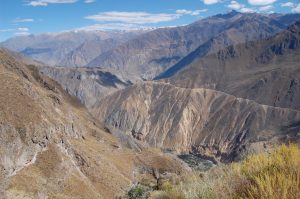 Day Four: More exploring Arequipa walking to the neighborhood of Yanahuara and its plaza for views over the city and of the El Misti volcano.  Market exploring and market eating. 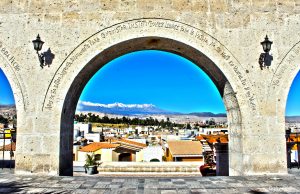 Those view were well worth the walk up and Arequipa is definitely worth the time if you happen to be in southern Peru.