It’s no secret that I’m a history nerd. Throughout school, history was always my first choice of electives.  Need a religion credit– Catholic History and the secret lives of Monks and Nuns was a much better choice than Old Testament 101. My favorite time period depends on my mood and sometimes my location.  I have written a thesis about the Mayans of Mexico, a lengthy paper about the Witches of Salem, and traced Spanish explorers around the world.   My interest in English history began while exploring/ living in England and German/Prussian/Austria-Hungarian history while hanging out in those countries.  I was a kid and somewhat remember the Yugoslavian conflict and was fascinated while walking around Belgrade/Zagreb, Serbia, and Montenegro.  Italy is a history nerd’s dream, and Greek military history is fascinating [and a perfectly good reason to visit Greece]. My year long plus jaunt around South American had me dabbling in history of its countries, and there is much more to the continent than Incas, narco-terrorists, and dictators.  Enter Peru and its colonial history.

Arequipa is a #historynerd’s dream and is a great place for anyone who loves history.  If you don’t love history, but like pretty buildings, it’s good for that too. And if you’re overloaded on all things Machu Picchu, come to Arequipa; it’s like the Incas never existed. I went without any fixed plans and was content to wander and enjoy its colonial structures.  Arequipa might be my favorite Peruvian city. Lima, the capital, is rough, gritty, and crowded. Arequipa is more refined. Cajamarca, in the north, has interesting history as well, but overall  Arequipa, having better infrastructure, is just a bit better suited to travelers; it’s quieter, cleaner and moves to a slower pace.  It is just my style. 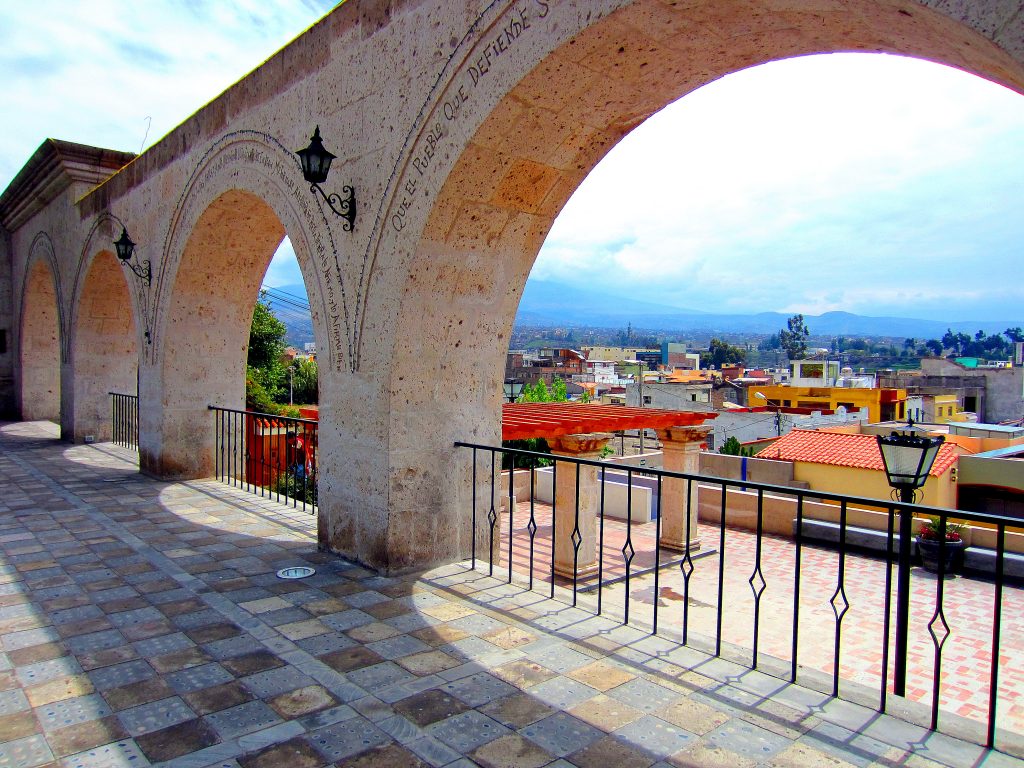 I always thought that had I been born in a different time and place I would have been a nun. Not necessarily because I’m a devout Catholic or would honor vows of purity, chastity, or poverty, but because nuns were the original bad-asses.  In societies where marriage was a means to an end, nuns spat in the face of that. And they were bad-asses in the health care arena too.  Yep, had I been born in the 1500’s, a nun was a much better deal than serf or some lord’s wench.

It’s with that mindset that Santa Catalina was high on my list of places to visit on my stop in Arequipa. Built in 1579, the monastery is a huge mini city within the city that was founded by the Dominican Second Order nun, Maria de Guzman. The Convento de Santa Catalina de Siena was initially meant for rich upper-class women from Spanish families [I would have had to settle for a bit more spartan monastery] and each family would have to pay a dowry upon their daughter entering the monastery. Some dowries were as expensive as 2,500 silver coins which would be the equivalent of $50,000 in today’s currency.  For their dowry, each nun got up to 4 slaves to do their daily chores but were also required to bring things like paintings, intricate tapestries, clothes, and other things would make the environment quite luxurious.  Nothing like the message “God is #1, but luxury is a close second.”  Maybe they didn’t get the memo that avarice was one of the seven deadly sins. 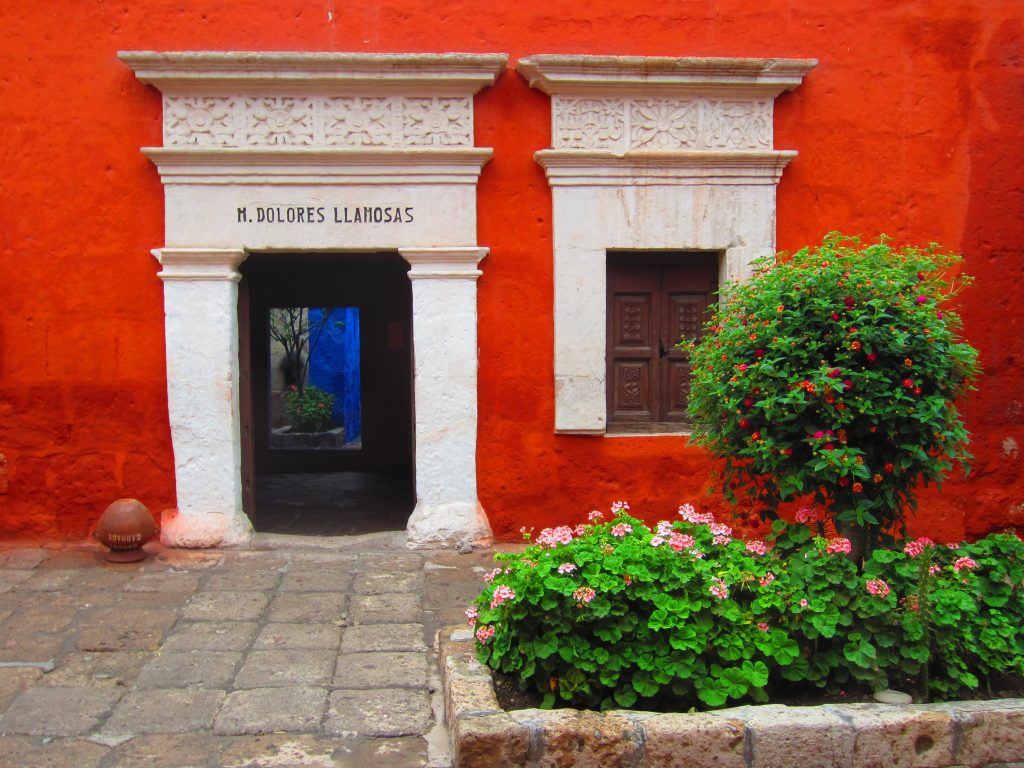 But gluttony and lust were equal pursuits

It was also pretty common for the nuns to throw extravagant parties in their quarters and rumor has it there are tunnels that connect to a local church so Mother Mary wasn’t the only invited guest.  On even more scandalous note, there are stories of pregnant nuns and monk baby daddies were fueled by the allegation that a baby’s skeleton was found encased within the monastery walls. [The Catholic Church denies the claims.]

The Santa Catalina Rave raved right on for nearly 300 years until 1871 when Pope Pius IX sent a strict nun [read: not part of the cool kids] to shut down the party at the Santa Catalina social club. Uncool nun also freed all the servants and slaves [OK, that part was cool] and sent all of the coins, paintings, tapestries, ect back to the Catholic Church in Spain in order to  reform the monastery. 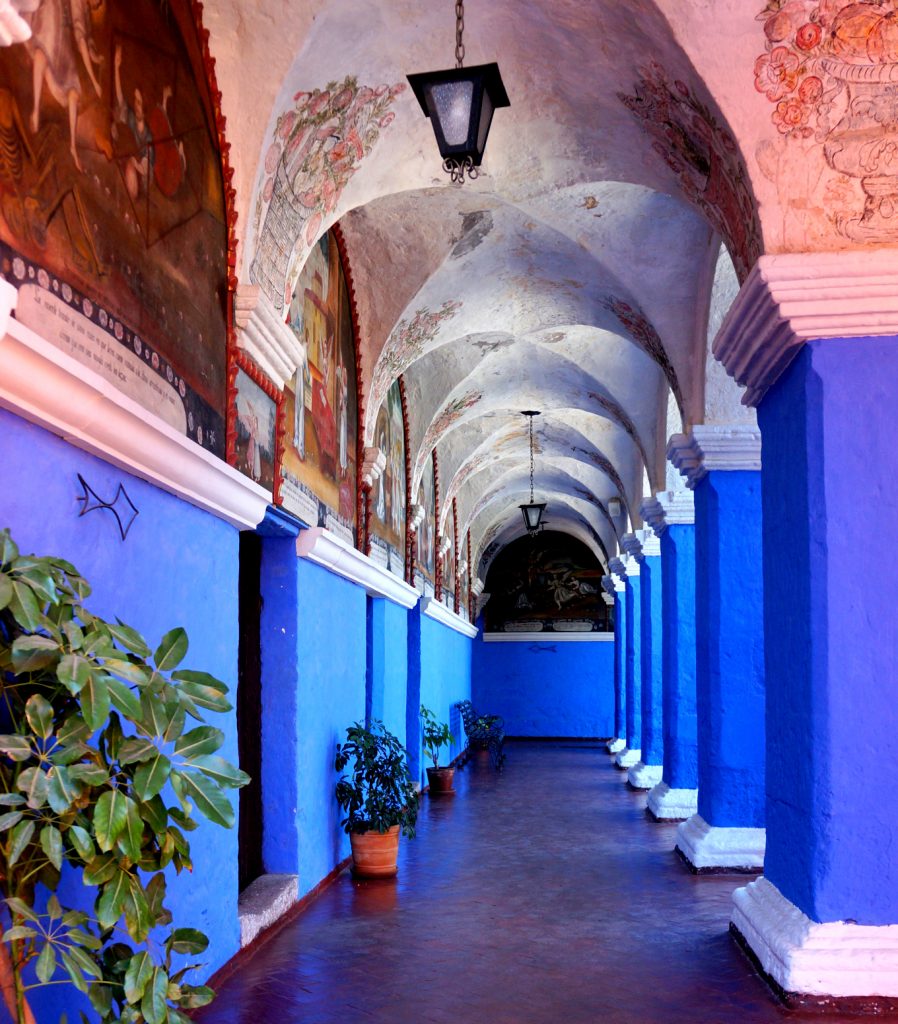 The monastery is constructed from sillar, a white volcanic stone quarried locally and painted blue and orange within. The convent is considered the most important and impressive colonial structure in the city. Since Peru is known for its earthquakes, these continual earthquakes and tremors have forced changes in the structure of the monastery and thus is has some singular architectural characteristics.

In the 1960s, the monastery suffered significant structural damage due to two earthquakes that struck Arequipa. The 20 remaining nuns voted to open the monastery up to the public as a tourist attraction; it was opened to the public on August 15, 1970–a mere 430 years after the city of Arequipa’s founding. The nuns used the funds to pay for restoration costs, install electricity, and install running water. 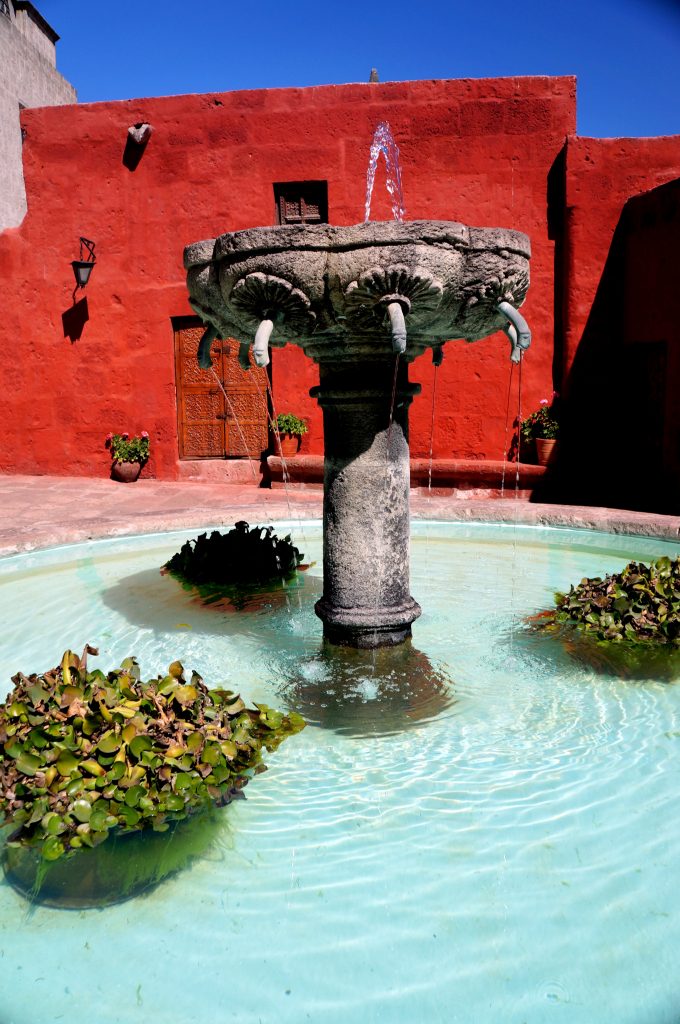 These days #historynerds like me can freely roam around the beautiful grounds and learn about the naughty nuns that loved to have a good time. And for the navigationally challenged– there’s an interesting twist.   From the instant you walk in – you can only make left turns. I spent 5 hours wandering the monastery only making left turns.  It’s impossible to get lost, and for someone like me, who likes to wander and not pay attention to which direction I came from, it’s a godsend. 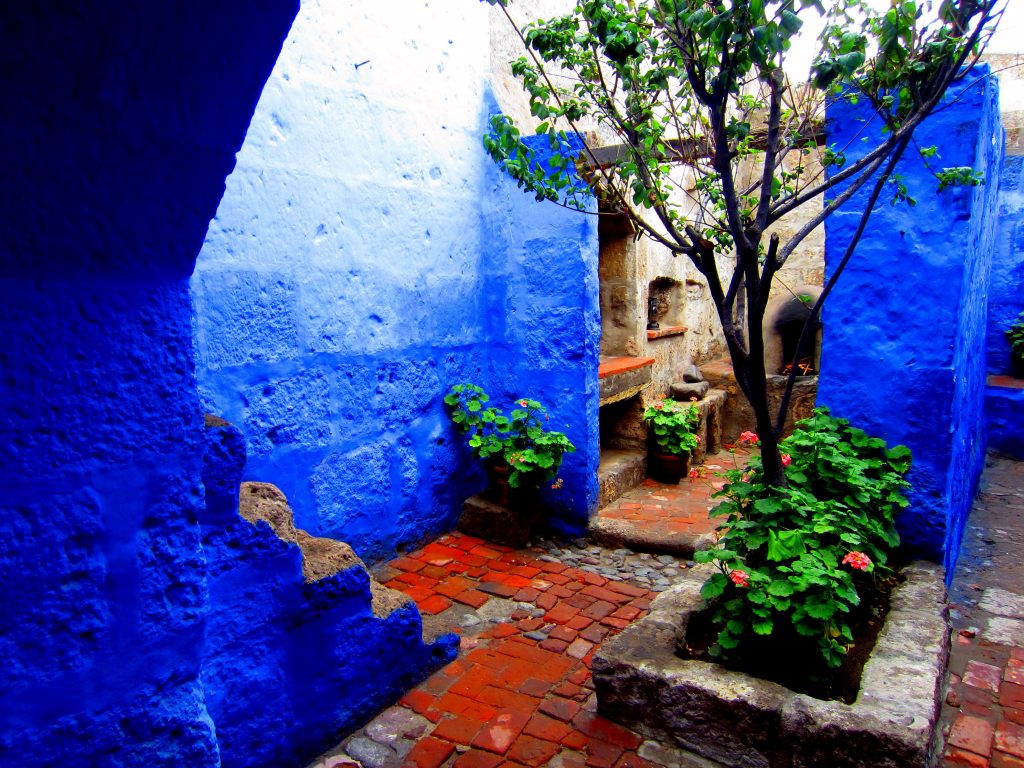