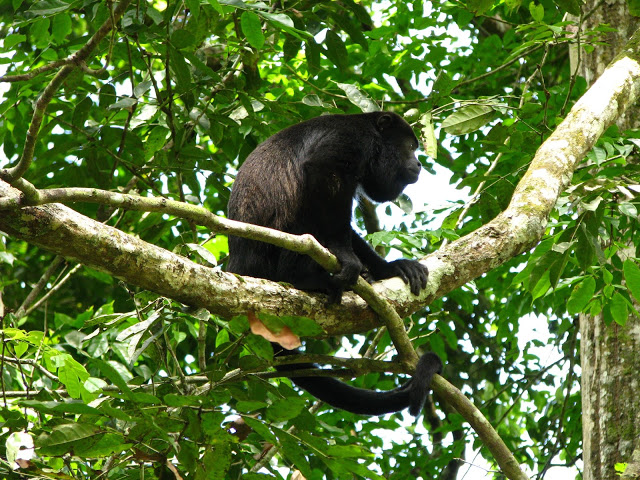 Tabuga is the village closest to the reserve. I use the term “village” loosely as it has–at last census–428 people in four different areas.  Roughly 75 families call the area home.  It is located on the northern coast of Ecuador, in the province Manabí. Manabí is the poorest and most illiterate province in Ecuador. There are no conventional phones; there is no cell phone signal nor television signal.  It has no laundry, no internet, or no bus terminal. There are 3 [unpaved] roads. There are two stores. They sell basic things like canned tuna, rice, sugar, soda, beer and Caña Manabita. Caña Manabita is a sugar cane alcohol that compares to ever-clear in the US and is sold for only $1.20 a bottle. A beer costs $1 and doesn’t get you to the point of falling over drunk sleeping in the dirt road. [A bottle of water is almost $2] Given the choice,  the men in Tabuga choose the cane alcohol and some don’t make it home until Sunday night… if they leave on Friday.  [Side Note: Women do not usually drink alcohol… especially in public]. 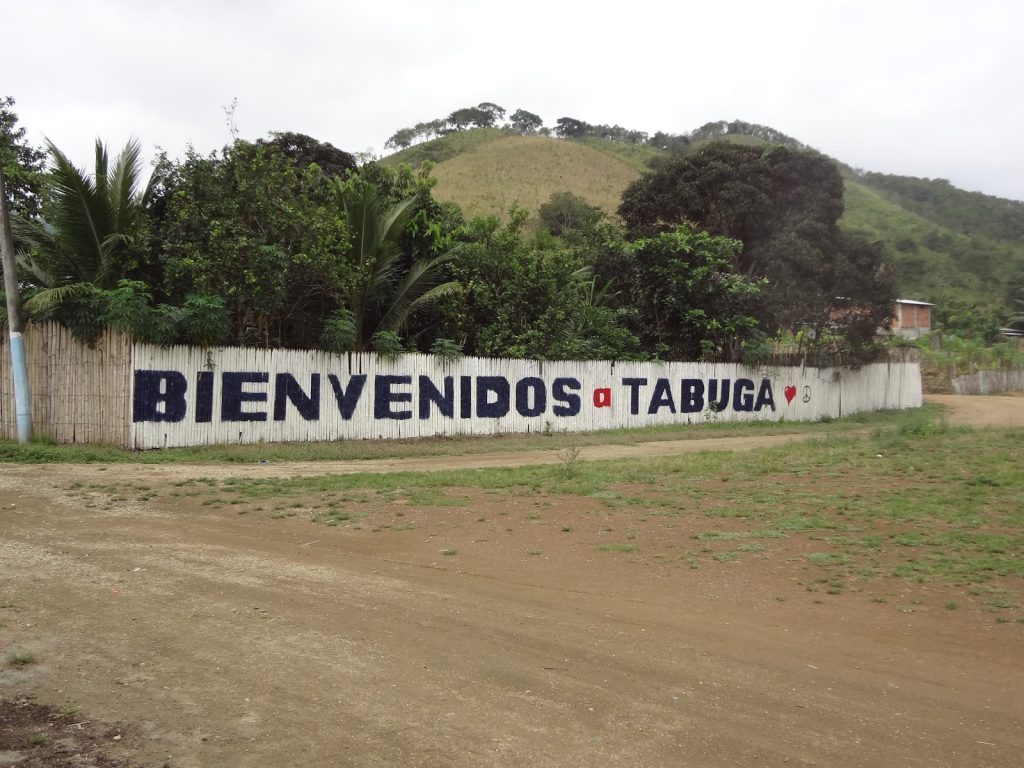 The majority of people live in traditional wood houses and many live in even more traditional flattened bamboo (called caña) homes. The majority of the income in Tabuga comes from machete work done for other large land owners. In addition, many families have small parcels of land where they grow bananas, passion fruits, java beans and yucca. The machete workers earn $5-7 per day.   The average number of kids per family is 6 and their diets are almost solely plantains and rice. Plantains are a  starchy, chewy, banana look-a-like that has almost no nutritional value.  I don’t understand why plantains are so popular when Ecuador is the banana capital of the world. The more well off families buy eggs and chickens.

In order for me to get to Tabuga, I have to walk.  It’s 2km from my thatched hut to the front of the reserve and another 1.5km from the front of the reserve to ‘town’. But Tabuga is the largest village between Pedernales (30.000) and Jama (7000). As such I guess that qualifies it for a 4 day festival and the festival began today. Since we took the AM off to do administrative things and buy food, we took the PM off to go to the festival.

Ah yes, back to the festival…I got off in reporter mode…

There is a version of soccer that I’ve never heard of until I came to these tiny towns in Ecuador.  It’s called Indur… sounds kind of like indoor, but is most definitely not played inside.  Ironically it is played on a concrete basketball court.  There are six players per side and in theory, moves a lot faster than regular soccer.  Or at least that’s the premise.  When the players are not good, well it looks a lot like a kid’s soccer match.  And since I never turn down a sporting event, especially while living in the woods with no electricity, I found myself at the local Tabuga Indur court where the girls over in Pendernales [you know, the Northerners from the other side of the Equator] braved the journey and scored the victory over the girls of Tabuga.  It was a blow-out 8-0 although I’m not sure what a normal indur score might be.

In a community [a very tiny community] where women are rarely seen  [not at the store, the library, or the nature center which is where I spend all my time], I am just impressed that they even have sports for girls.  Or that there are enough girls to make up a team.  After the official indur match, the unofficial ones began, and at the unofficial match, I played my very first game of indur as goalkeeper defended my goal valiantly as some cocky boy found out when he got my knee in his side for trying to get to fancy, and he did not even score. My team won 5-2, and I have respect on the indur floor as I was asked to play again tomorrow.  There is nothing more satisfying for me that taking it to a bunch of boys who 1) think girls can’t play sports [and in this scenario, I am a girl] 2) think anyone over 20 should never leave the house.

It’s not my goal to enact social change in the short time I am here, but if I can inspire one girl to play sports or one girl to come to the library and read more, or one girl to stand up to the gangs of boys that rule these tiny coastal towns, then I consider this stop a success.  If playing soccer or reading books can keep one girl from getting pregnant before 16, then it’s a good day. In a community with no official school, how can people combat ignorance and poverty.  Without exposure to other ideas, how can a girl decide that 16 just might not be the perfect age to have a baby.

Ooops… I slipped in social warrior justice mode for a minute…

After the girls’ played, it was time for the boys. The teams were made of six boys from Tabuga on each side. They were probably 6-9 years old. Final score 1-0. The boys of the winning team each won 75 cents. They took up a collection prior to the game and came up with $4.50 for the winners

Second up, was open mike singing. Some were good, some were truly awful, and I, as the only foreigner in town–special guest from South Carolina, got to be the judge. The prizes were 1st–a chicken 2nd–food from the vendors and 3rd beer or coke depending on the age of the winner. Two hours later, I awarded a chicken (live) to a teenager named Segundo, and he was beaming ear to ear as if he had won a million dollars.

Movie night.
After indur, open-mike singing, and cock fighting [yes, cock fighting], it was time for the movie at the festival of Tabuga.  The director  of the library [a former Peace Corp Volunteer who has essentially moved to the area] and I organized movie night for part of the festival.  The movie was to supposed to start at  8p, as per usual in these off the grid places I find myself, despite having obtained special permission to use electricity after the sun went down, the movie did not start until almost 10p–which was disappointing.  The movie was the Jungle Book meant for the kids which due to the late start time, most of the kids either left or fell asleep by 11:00p.

How does one have a movie night for the town in a town that has limited electricity and requires special permits to use said electricity after certain hours? A white bed sheet pulls double duty as a movie screen.  Indur posts serve as attachment supports and an old ibook turns into a movie projector. 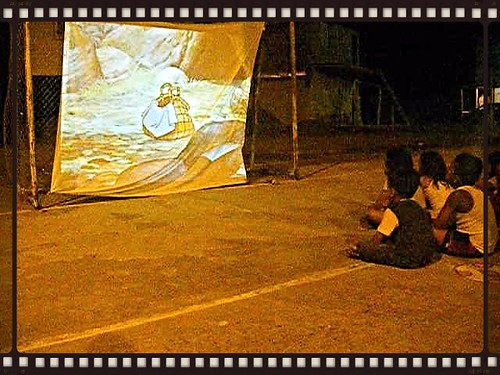 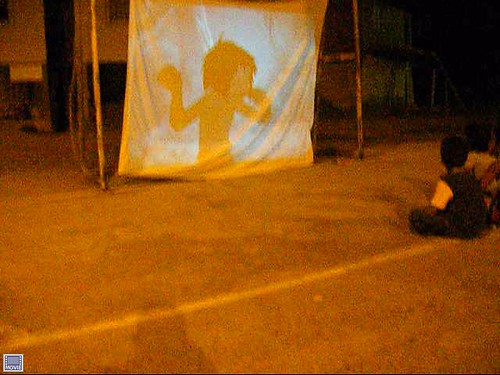